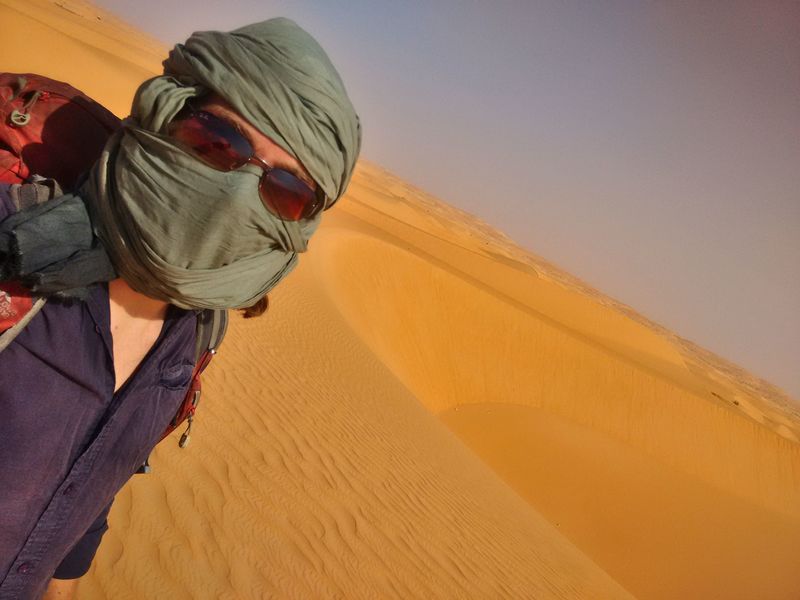 Lack of energy day by day…

The last few months I wasn’t very active on my blog. I was never really in the mood for writing. And generally my energy was kinda low. Not that I was unhappy, but just not as energetic as I used to be.
I mean I was still hitchhikig around the world seeing many beautiful places, meeting many wonderful people and having countless heart-stopping experiences. But I just couldn’t appreciate them as much as I would liked to. Travelling became my daily life and it was nothing special anymore.
My trip hitchhiking through Africa became a challenge which was just to be done. I was running after my goal without enjoying the way. Of course I wasn’t fully disliking it. Still I was travelling some amazing countries. Morocco, Mauritania and now Senegal. I was hitchhiking through the Sahara, riding on the wagons of the Iron Ore Train through the desert of Mauritania. But it all was more because I was challenging myself.
I was just too much thinking about everything. I couldn’t fully enjoy the places I found myself in. And just as I reached one place, I was already looking forward to the next place. I became restless.
I came up with some excuses like “I don’t like this place, it’s too big.”, or “too many people for my taste” or “It’s too dangerous.”. And moved on to the next place.

On the road in Western Sahara

Sleeping in the Sahara 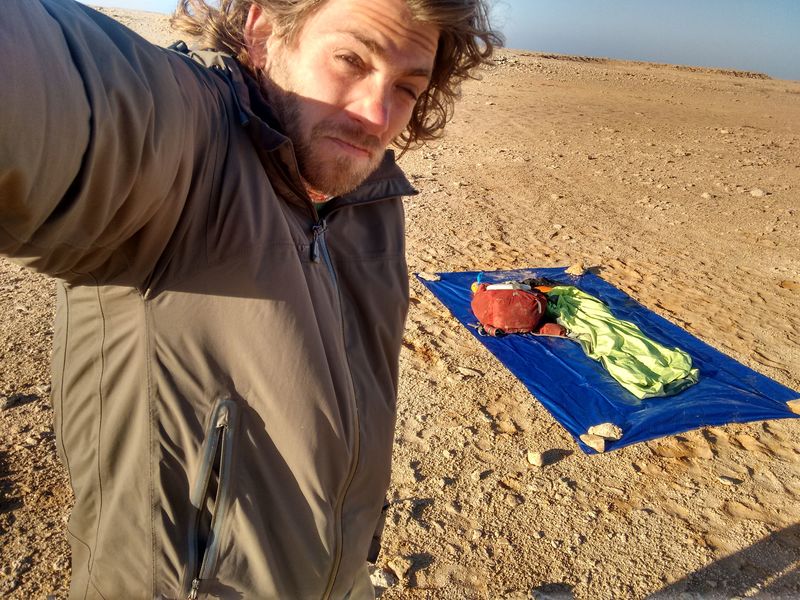 When sincere hospitality becomes too much

In Mauritania then the self-pity of my circumstances struck me. I couldn’t get any money from the ATMs in Nouadhibou (they only take Visa cards). And to really experience the country, and not just rush through with the little cash I was carrying on me, I had to rely on the hospitality of the people – which is amazing in Mauritania anyway! So poor me had to stay with lovely locals. I mean it was nice and everything, but after a while I just wanted my peace. 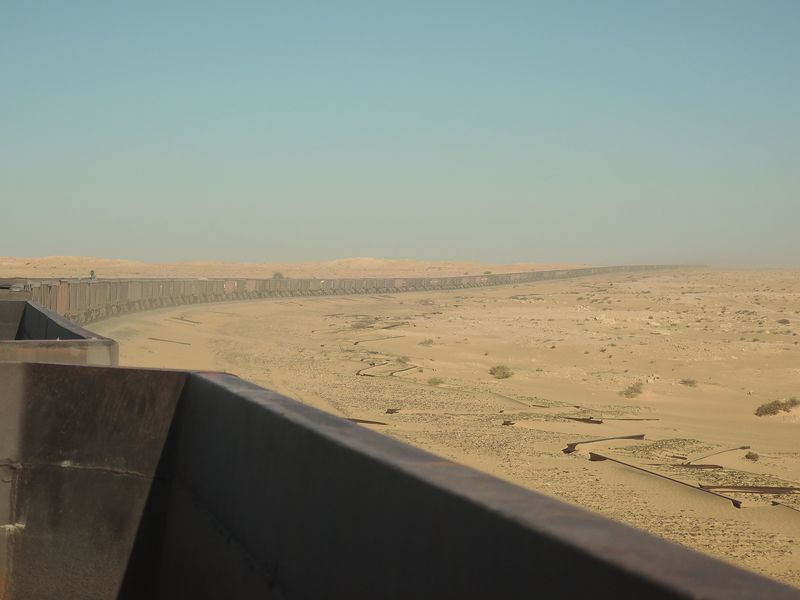 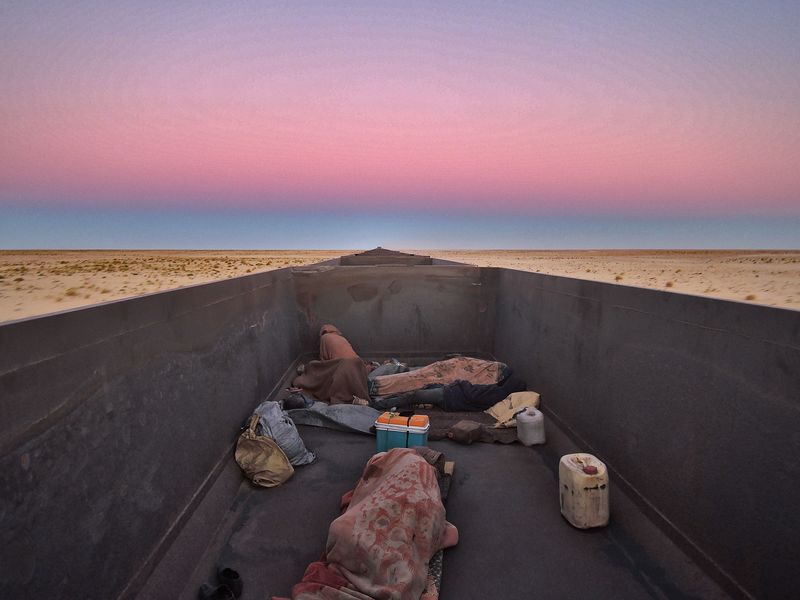 And the best, if you do the 24 hour ride in one of the iron ore waggons it’s for free! 🙂

So it happened in Chinguetti, a peaceful village in the middle of the Mauritanian Sahara, right when I needed it the most that god sent an angel. Gudrun, a lovely and good-hearted person from Austria appeared. She raised me up, fixed my feathers and helped me out with a generous donation for my travels. Thanks to her I gave myself some rest and allowed myself a room in a guest house. 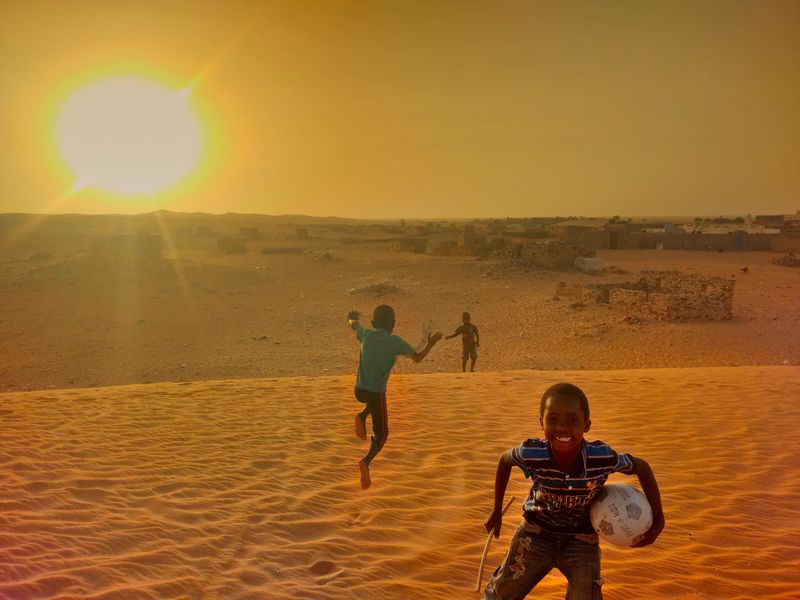 And after a few days of rest I set off for the next adventure, hiking 12km through the sand dunes of the Sahara to Lagueila, a small and lonely oasis in the middle of nowhere. After four good hours of hiking and dragging myself up and down the sand dunes in the heat of the Sahara, just when I wouldn’t believe in it anymore suddenly the oasis appeared right in front of me. And as soon as I reached the Oasis, the inhabitants, one lovely family welcomed me with open arms, invited me for chai and to have dinner with them. And at night they even prepared a bed under the stars for me, after I told them that I love sleeping under the stars.
The next day I didn’t head back right away as planned, but decided to spend the day with the villagers and cultivate the date palmerie and the vegetable garden together with them. In the evening then I walked back the long 12km and together with some Nomads (and their sheep and camels) I met on the way in the middle of the Sahara I just made it back to Chinguetti before the night. 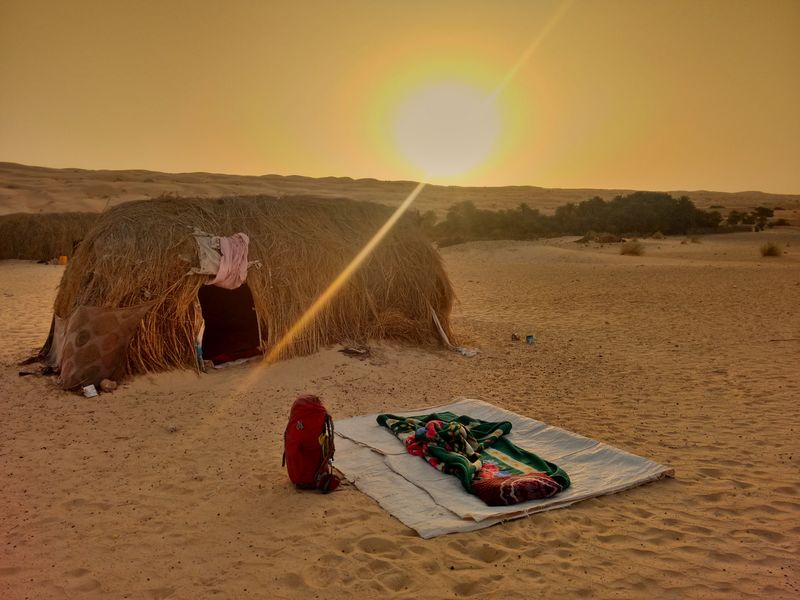 Sleeping in the Oasis Lagueila 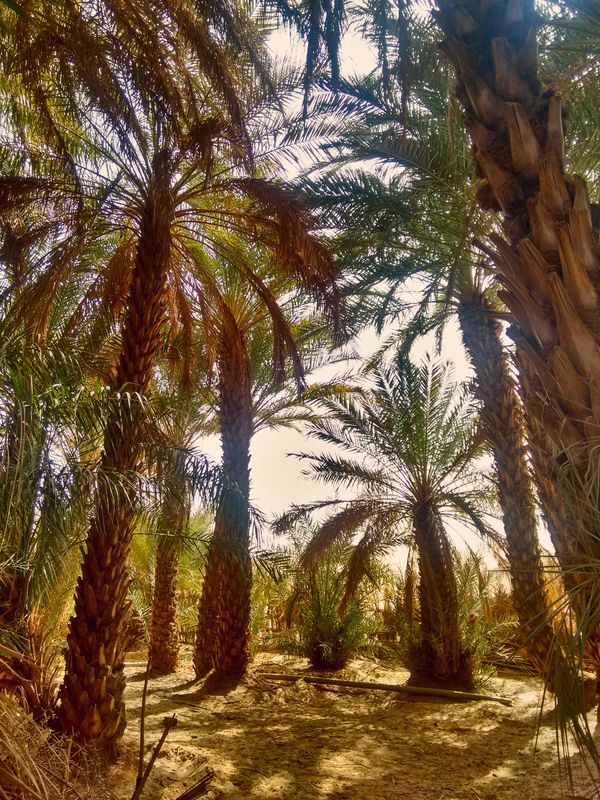 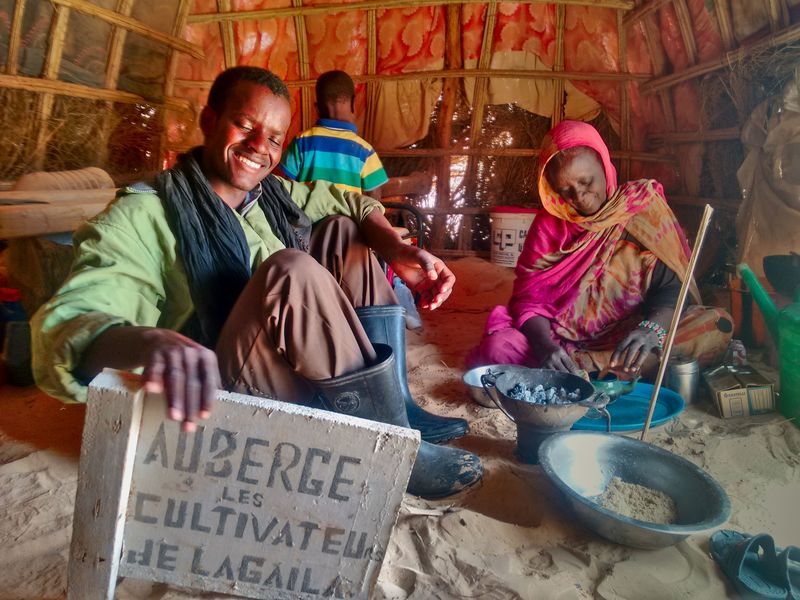 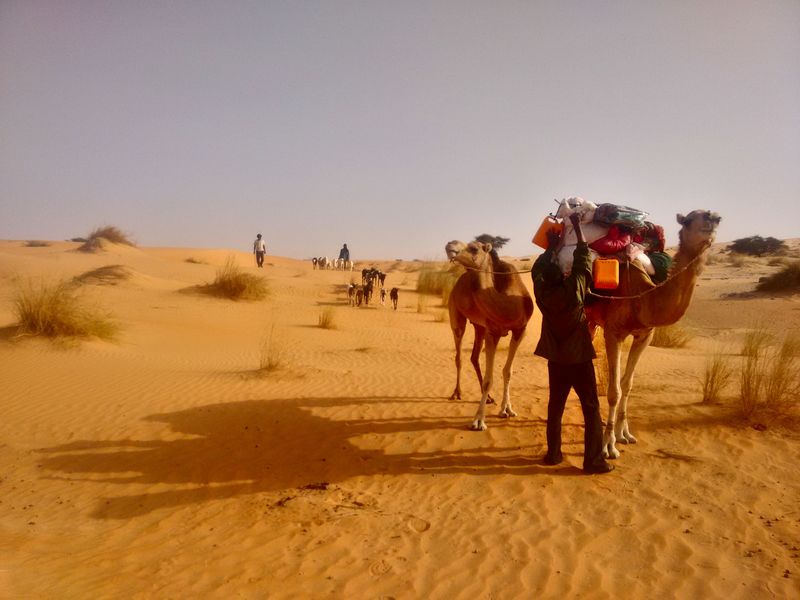 With nomads in the Sahara

After Chinguetti I was heading to Nouakchott, the capital of Mauritania. From there I was going to head towards the border with Senegal after a few days of rest.
But then I received the unexpected news, that my granny passed away. Rest in peace Omi! And again I found myself in the thinking mode that takes away the joy of life.

So after a while, when I finally reached Senegal and found myself in Dakar, my energy was still quite low. I guess for that reason I was easy prey and the false tour guide managed to deceive me. At first he seemed like a nice guy offering me a place to stay and we arranged that I could stay with him and his sister for just 4000 FCFA (around 6 Euro) for two nights. But then he was always asking me to pay for this and give some money for that. So I gave a lot of money to him and his family and he was still asking for more. So after two nights I took off, spending in just two days in Dakar more money than I was expecting to spend in one whole month in Senegal.

At that time I felt quite lost, not knowing where to go and where to find good people in Senegal. Anyway, I headed South towards a place called Saly. Yassim, a friend of mine from Morocco told me that there are some good people and it would be possible to stay with them for little money.
When I left Dakar, it was already late in the evening. And after taking several buses to get out of the city I found myself in a small village on the outskirts of Dakar. I was walking along the dark alleyways as I walked past a small garage store where there was still light coming out. I walked in and found a young Senegalese guy working on a computer. So I asked the guy if I could charge my phone in his shop. And he was, “Sure, why not!”. He pointed at a couch, “Just take a seat.” while he connected my phone for charging. Not that I couldn’t charge my phone with my battery pack, but I was just seeking for some human interaction. And while I was sitting on the couch, waiting for my phone to charge I was struggling to keep my eyes open. So after a little conversation with the guy I asked if I could sleep on his couch tonight. And when he said that he would have to close the rolling shutter and lock the store over night, I told him that it would be fine for me. He then disappeared for a while and when he came back he told me that I could stay with him and his family for the night. He took me in his house where he gave me a nice mattress with a good mosquito net for a calm night. 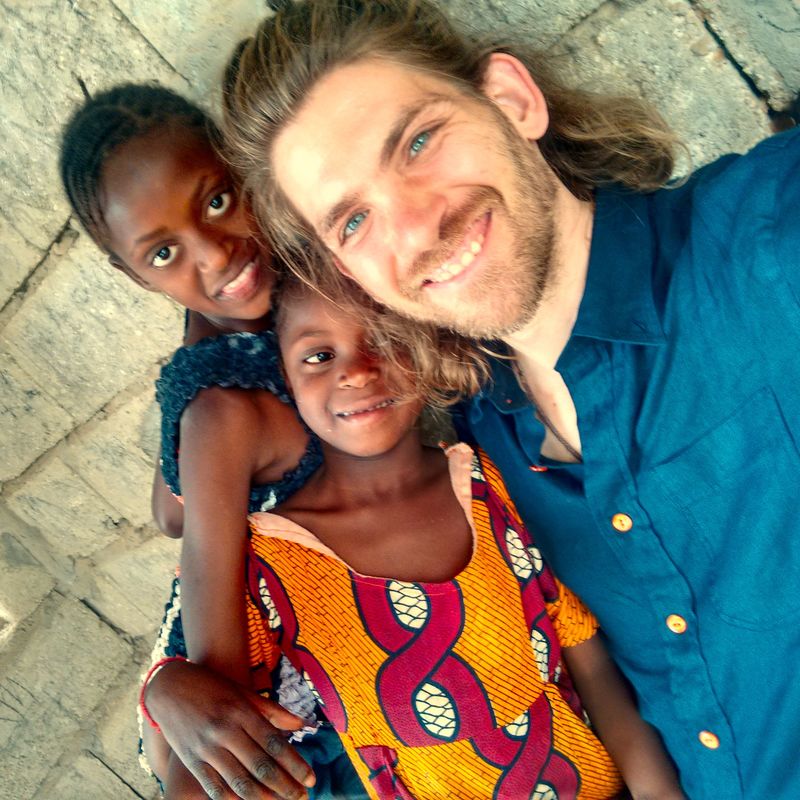 Staying with a lovely family in Senegal

The fun of hitchhiking in Senegal

After a good night in a peaceful village in Senegal my faith in humanity was restored and I continued hitching to Saly. Hitchhiking in Senegal was fun and easy so far for me! First a truck driver picked me up and took me a bit down the road. He didn’t speak any English, but we got along with my bad French. And after that I waited another 30 minutes until the next car stopped for me. It was a wealthy man working in nuclear research here in Senegal. And when I told him that I’m from Austria, he was so happy because he’s been there many times for some conferences about nuclear power.
So after two rides hitching easily from Dakar and waling another 30 minutes, I reached Saly early in the afternoon. With the good description of my Moroccan friend, Yassim I found the place he mentioned easily. It’s an abandoned hotel called The Beach Club and lies on a beautiful beach filled with coconut palms.

So I came there and asked for Babacar. And the people where like “Ah, you’re a friend of Babacar! Come, he’s here!”. And when I told them that my friend Yassim sent me, they were very happy and asked about his well-being. They have rooms for rent in the abandoned hotel. Very basic, without electricity and the water they bring in buckets. But when I told them that I’m travelling on a budget and I don’t really need my own room, they invited me to stay with them on the ground floor of the building.
So I stayed with them a few days and had a very relaxing time with an amazing view of the beach. One day we got some fresh coconuts from the palm trees and smash them on the ground until the outer green shell broke open and the brown coconut (as we know it from the supermarket) came out. 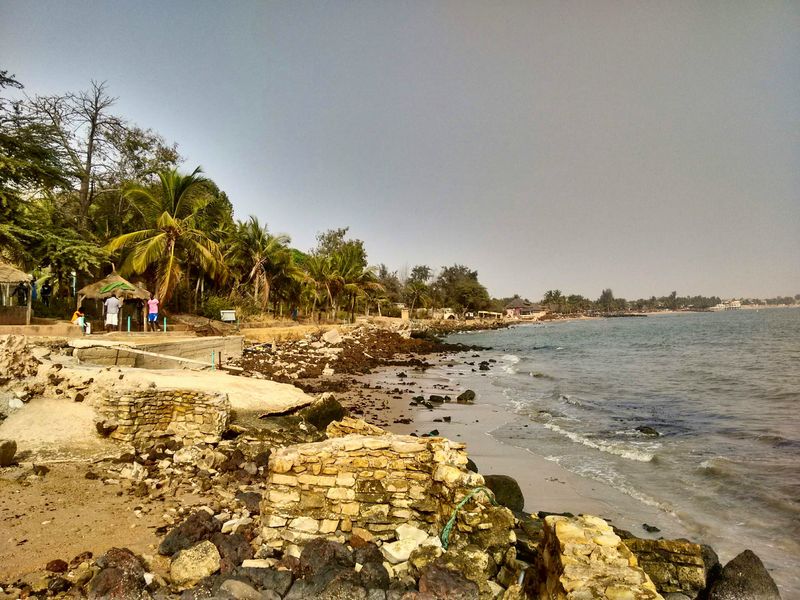 The beautiful beach of Saly 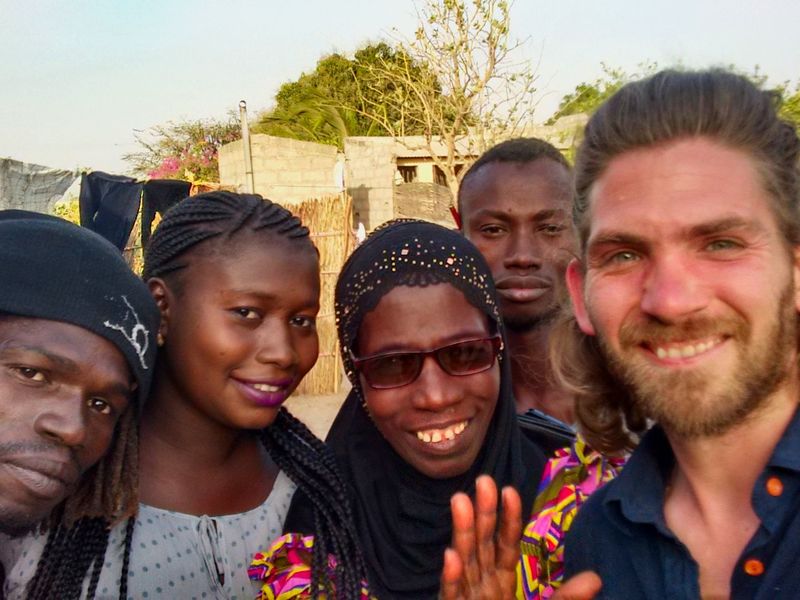 Babacar (on the left) and his lovely family

And just when my body could rest a while it was giving me the bill. I got sick and had to stay in bed with heavy fever. First I thought I catched Malaria in Dakar, but the doctor assured me that it was just an ordinary flu. So I was sure it was just the aftermath of my general unease.

So how did I get out of my self-created missery?

First of all to get well I had to stay in bed and watch the waves for a week. But I couldn’t have chosen a better place to get sick. Babacar, Sajo and the people from the Beach Club took good care of me.
And then as soon as I was getting well again, I started reflecting and became aware that all my suffering came from a demon called “restlessness”. A demon I gave birth to and raised all by myself. I realised that I was constantly feeding him with the need to go further and further. Until he became a fat and ugly companion, very much attached to me. So I told him, that I’m happy that I had him at my side and that I’ve learned a lot from him, but that I don’t need him anymore, and that I not feed him any longer. He accepted and walked away.

Most illnesses creep in when you are not present in your body. If the master is not in the house, all kind of shady characters will take up residence there.

Two more things helped me a lot to focus more on the moment again and find the joy in what I have, here and now.

First I started writing again. Not for my blog, but I write now every morning at least six pages in my notebook. Not like a diary, but more like whatever is in my head. Whatever is in my head I vomit on the paper, with help of the pen. This way I don’t judge my thoughts, but just accept them as they are. The concept of morning pages is described by Julia Cameron’s book, The Artist’s Way.

An Secondly I’m reading a book from Eckhart Tolle, The Power of Now. It was laying on my kindle for long time and for some reason I felt the time has come to read it. And I must say, I can totally recommend it. It really helped me in finding the joy in every moment again.

Are you sometimes feeling restless while travelling? How do you handle the inability of enjoying the moment as it is here and now? Let me know in the comments. 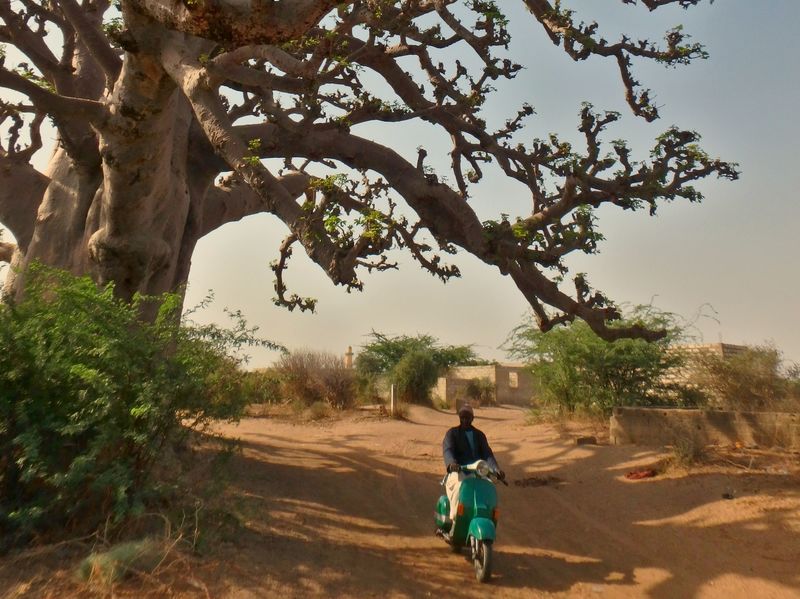 Traveling without money in developing countries - is it ethically right?