Picnic in the mountains of Amedi

So in Iraqi Kurdistan I stayed one day with a nice guy in Amedi and we had a great picnic in the Mountains. The next day I decided to go hiking in the mountains. The people told me it is dangerous to go alone in the mountains but there was no big risk after knowing where to go. There might still be some landmines left from the Iran-Iraq war but if I stay on the main path were they are driving with the jeeps, it’s no problem. They also said there might be some terrorist from PKK there in the mountainous area near Turkey.
So I was hiking several hours from early morning and at noon time I arrived at a shepherd’s cottage on the plateau of the mountain. The shepherds where very friendly and gave me some cheese and chai. Then I continued walking and after a while I arrived at a place where my friend from Amedi said there is a camp of the PKK there (we had our picknik near this place). So I thought, let’s go there and see if someone is at home.
So when walking to the PKK camp I was not sure if I should be frightened to death or if I should relax. But somehow I had a good feeling about the situation. So I walked a bit and a car came towards me and I just asked them for the way to the next town. They did not speak english but told me I should come with them. I followed them through the forest and then an english speaking guy with a Kalashnikov hanging down on his shoulder came to me and asked me what I want here. I told him I walked here from Amedi and I want to know the way to the next village. He said I should come with him and he took me to a tent where more guys and two girls in camouflage where sitting with their Kalashnikov next to them. They all stood up when they saw me smiled and shaked my hand. The english speaking guy told me that this is their hideout in the mountains and they are very happy to have me as their guest.
So after that I relaxed and had an amazing afternoon with Herman (the english speaking guy) and all his hawal (friend in Kurdish) from the PKK. I had some interesting conversations with Herman who lived several years in the UK and has the British citizenship. In the afternoon they served a delicious meal with Dolme (vine leaves and tomatoes filled with rice). After that Herman showed me around in the camp. In the main tent they have pictures of their leader (who is in prison in Turkey) and of all their friends who left their lives. Herman showed me the graveyard and a room which they use as memorial place where I wrote some nice words into the guest book. And after showing me around we had a great time playing volleyball all together.
So after spending a great afternoon with my hawal from the PKK a friendly Kurd who was also at the camp took me to Zahok, hosted me for one night and brought me to the Turkish border the next morning. 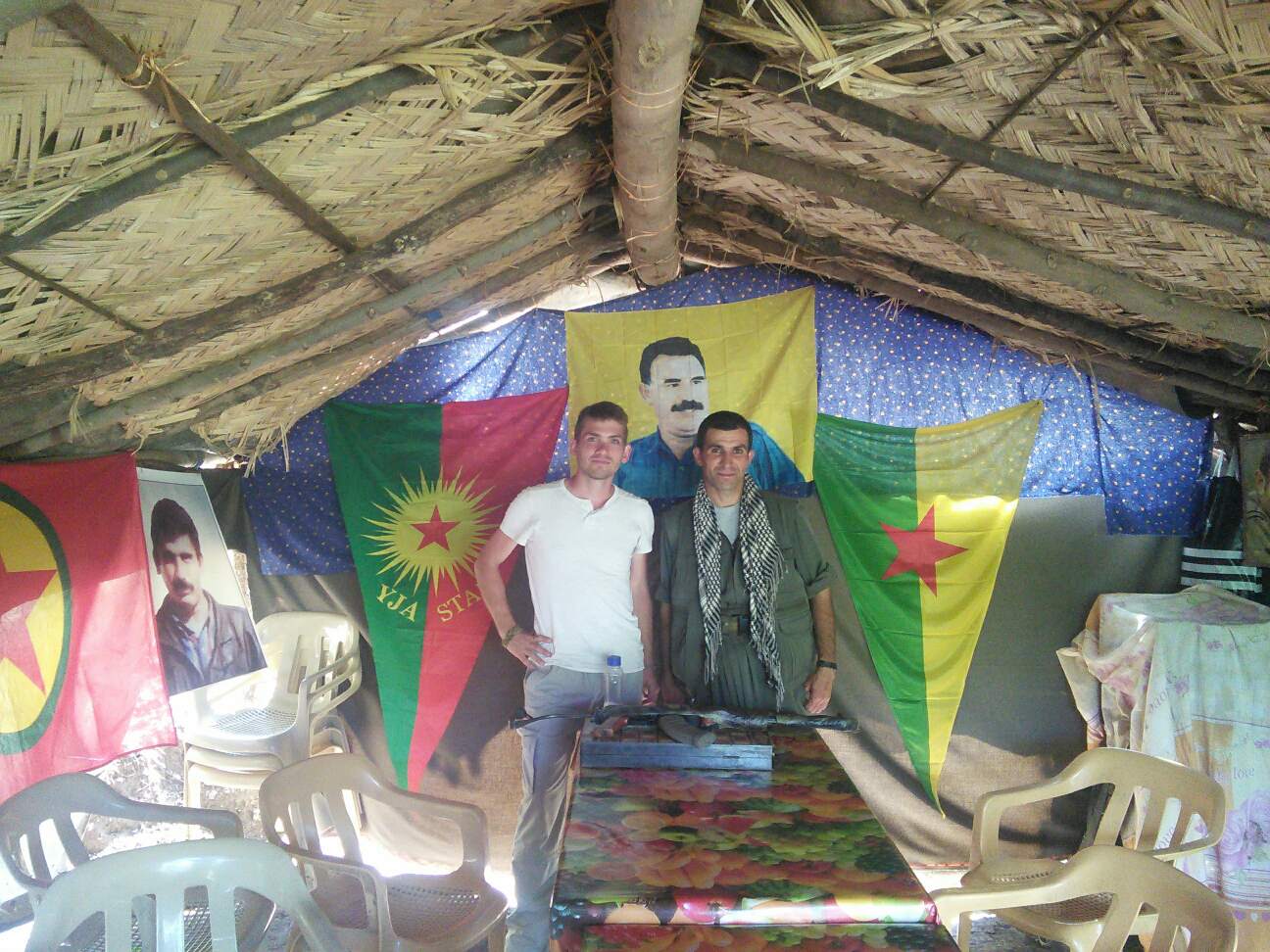 Me and Herman in the PKK camp 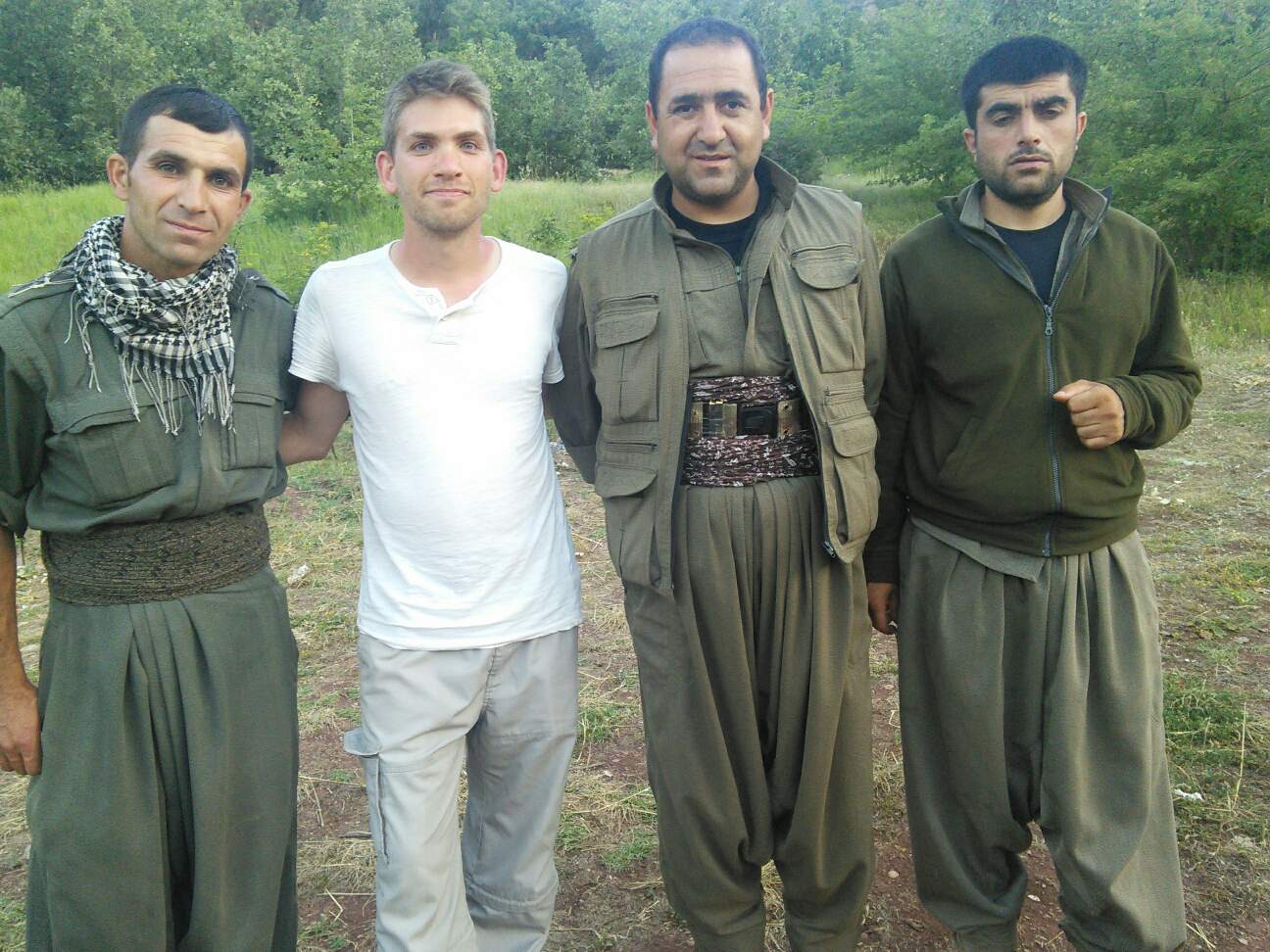 So at the end the situation in Iraq is very bad currently. But – like in many countries with ongoing conflicts – if you do your homework and get information about where you can go and where not you will have some great experiences.
In Iraqi Kurdistan I actually felt more safe, then I in Turkey – especially when Herman said “he and his friends will do everything to protect my life because I am their friend” I felt very safe.
And the Turkish police tanks patrolling in whole Turkish Kurdistan don’t give a good feeling either.

The Turkish part of Kurdistan has some really beautiful places like Hasankeyf, a charming town directly at the Tigris river. Unfortunately I had to find out that this beautiful town won’t exist anymore next year. Turkey is building a massive dam putting this cultural heritage under water and badly affecting the nature downstream the Tigris. What a shame!
http://news.nationalgeographic.com/news/2014/02/140221-tigris-river-dam-hasankeyf-turkey-iraq-water/

But also Midyat with lots of churches and a nice monastery is very nice. When I came to Midyat I was wondering why they have so many wineries and who would drink all that wine. In Midyat there used to live 90% Christians. But now all Christians emigrated and it’s 90% Moslems and only 10% Christians. But of course where Christians are, there is also wine. 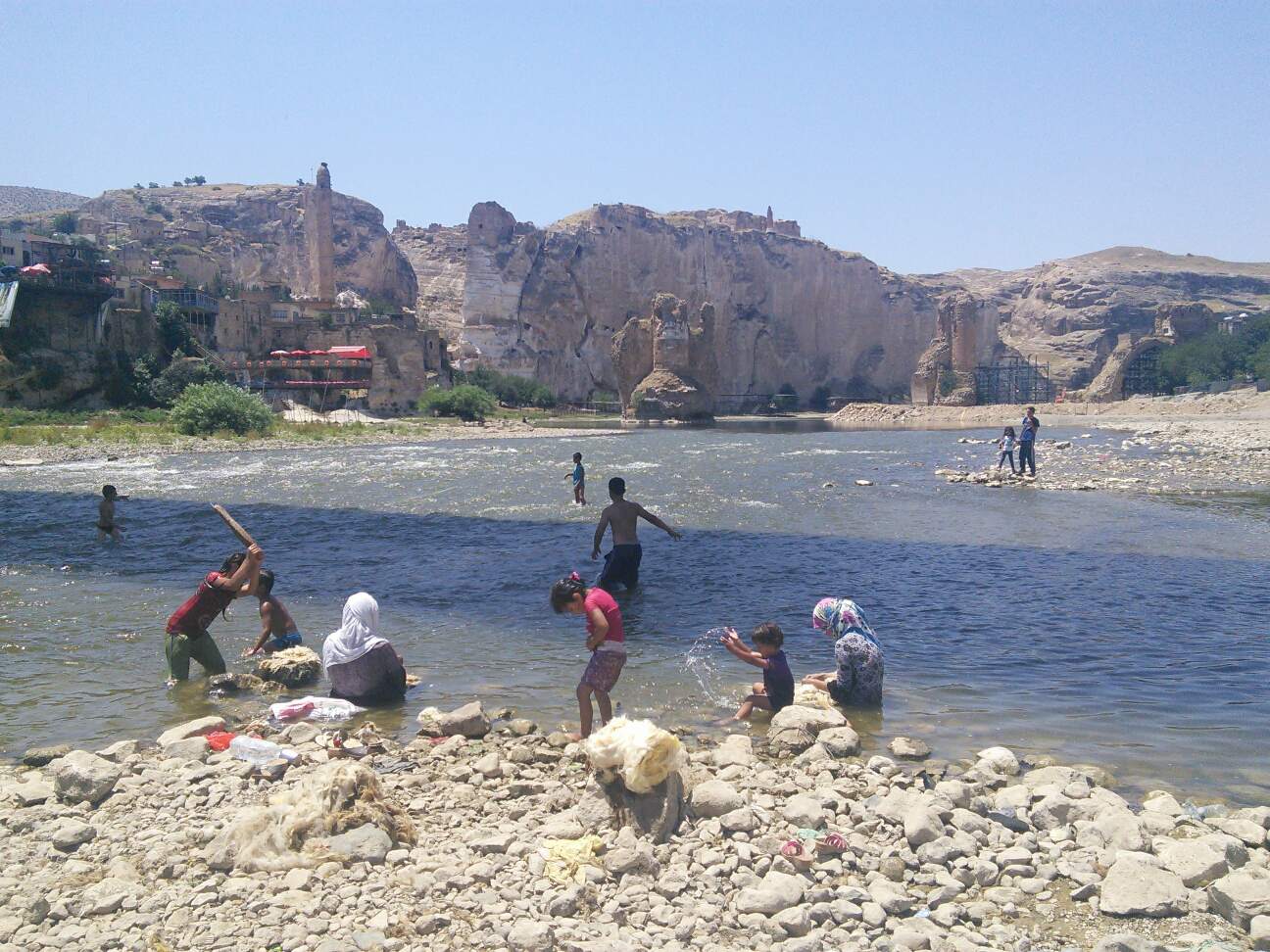 The Monastery in Midyat

Another day I was in Tatvan, a pretty unspectacular city at lake Van. But since it lies directly at the foot of Mt. Nemrut, a nearly 3000m high Vulcano, I decided it’s time to go hiking again. 🙂
In the morning I was really tired and could hardly get up. Still I managed to pull myself together, strap on my 10kg backpack (2kg food and water) and start walking. Luckily a truck stopped for me at the foot of Mt. Nemrut and took me up to the crater, otherwise it would have taken me several days. 🙂
Inside the crater there is the beautiful lake Nemrut Gölü. I was hiking several hours through the crater and got rewarded with a beautiful scenery at the lake. After hiking back up the crater for another few hours I got a ride back to town and was really tired. 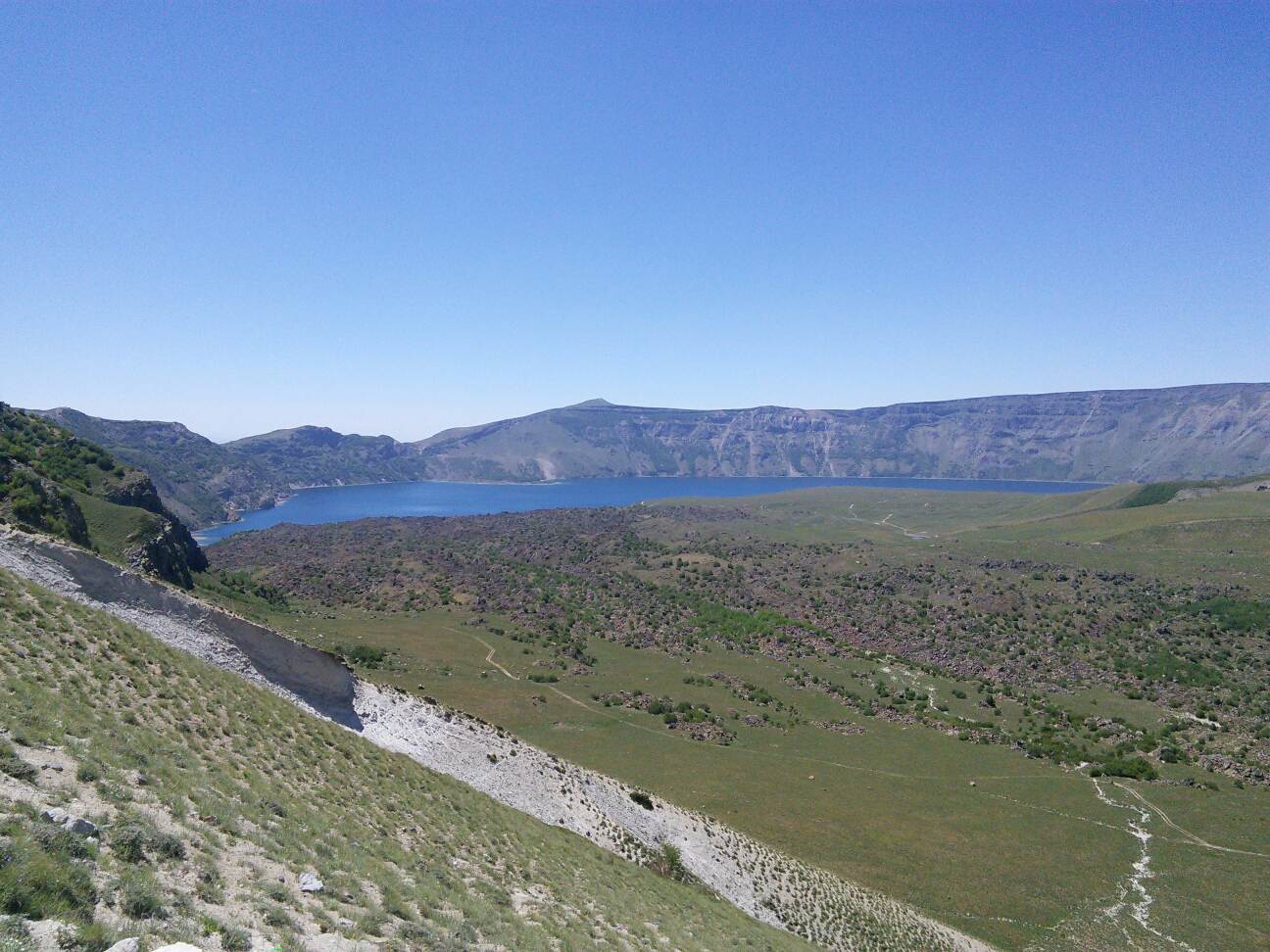 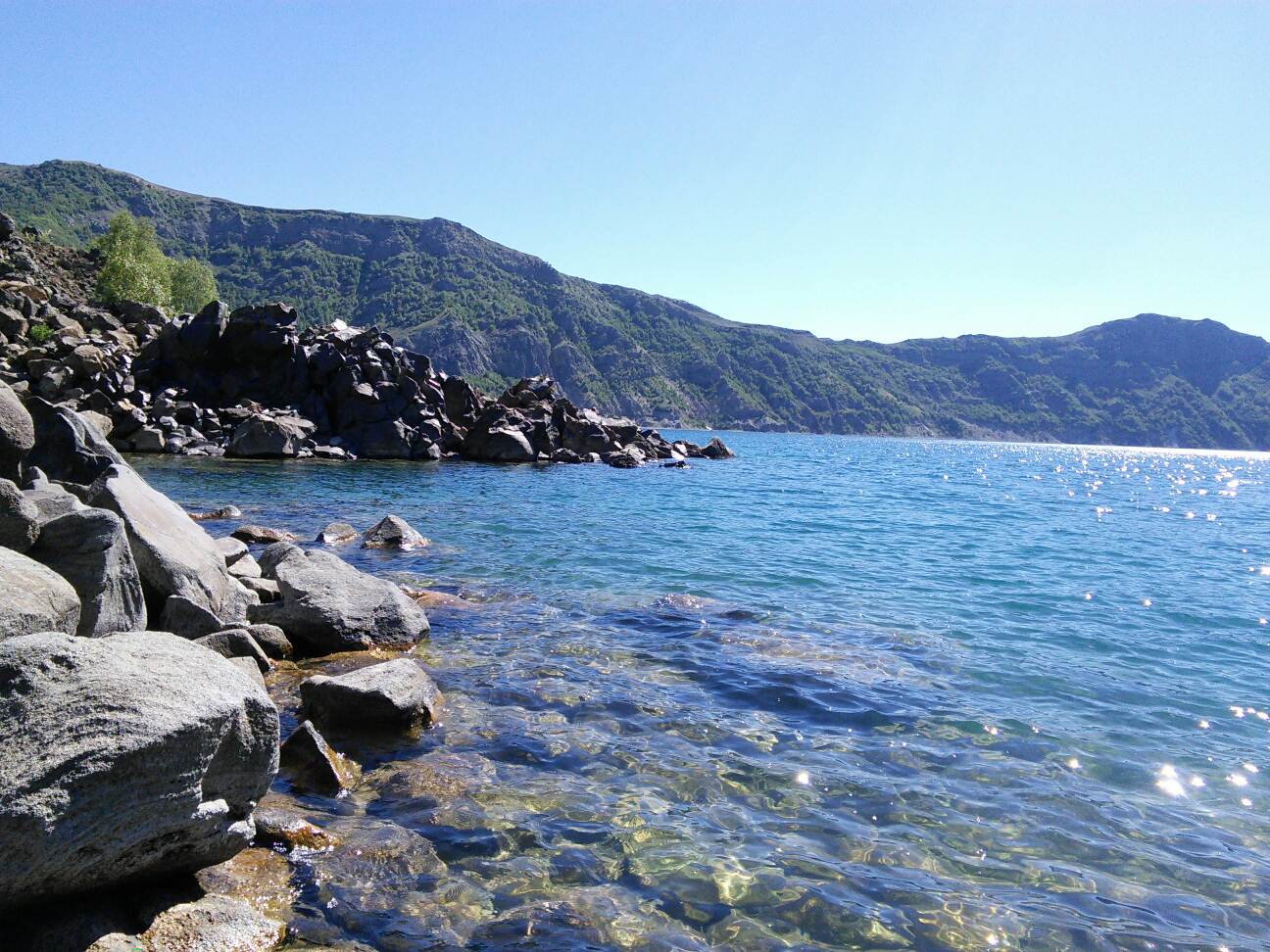 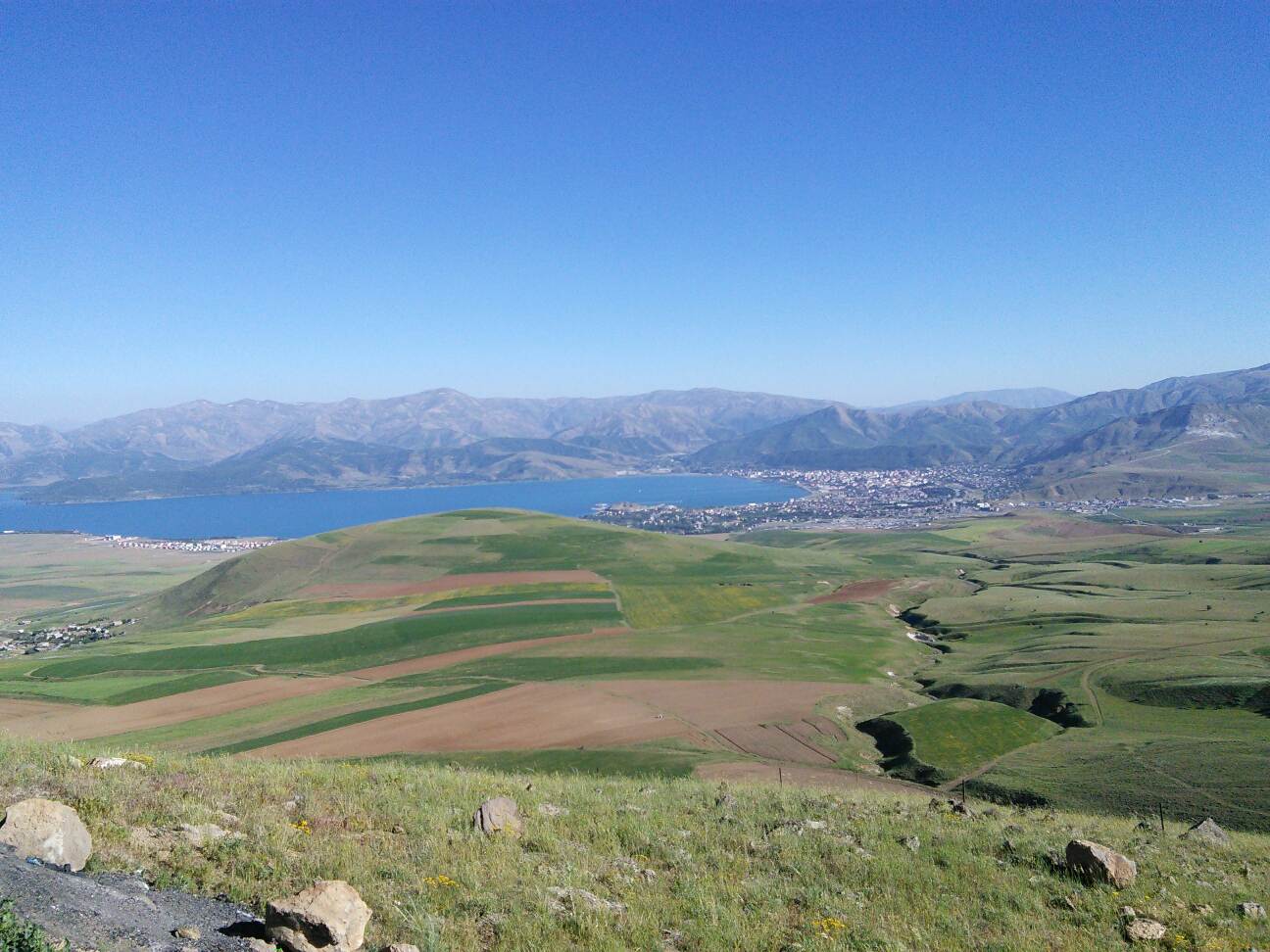 Although it was quite late I decided to hitchhike to Kars. Near to Kars are the ruins of the former Armenian capital Ani. I didn’t have to wait long and a truck picked me up. I told him he should drop me at the next gas station so I can sleep in the mescit (the praying room that every gas station has). But he was happy to offer me his extra bunk in the back of his truck cabin. So I fell asleep happily while the truck driver was driving me to Kars. 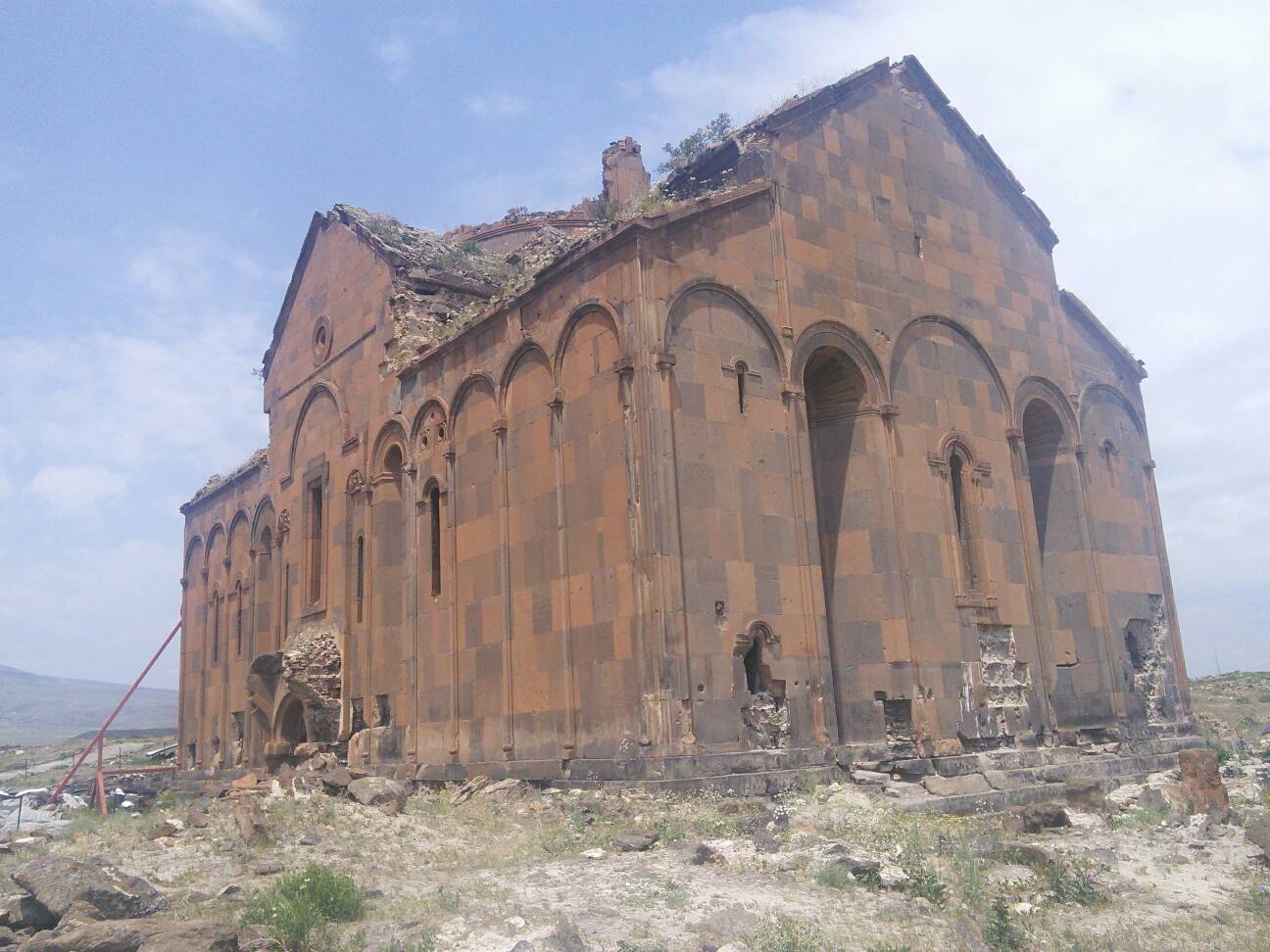 The river at Ani is the border between Turkey and Armenia 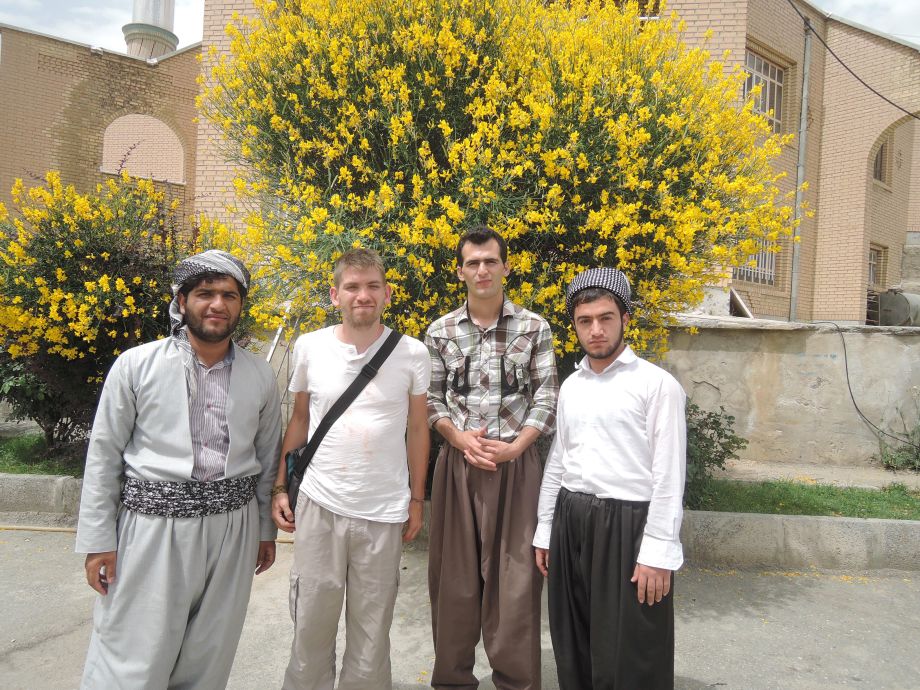 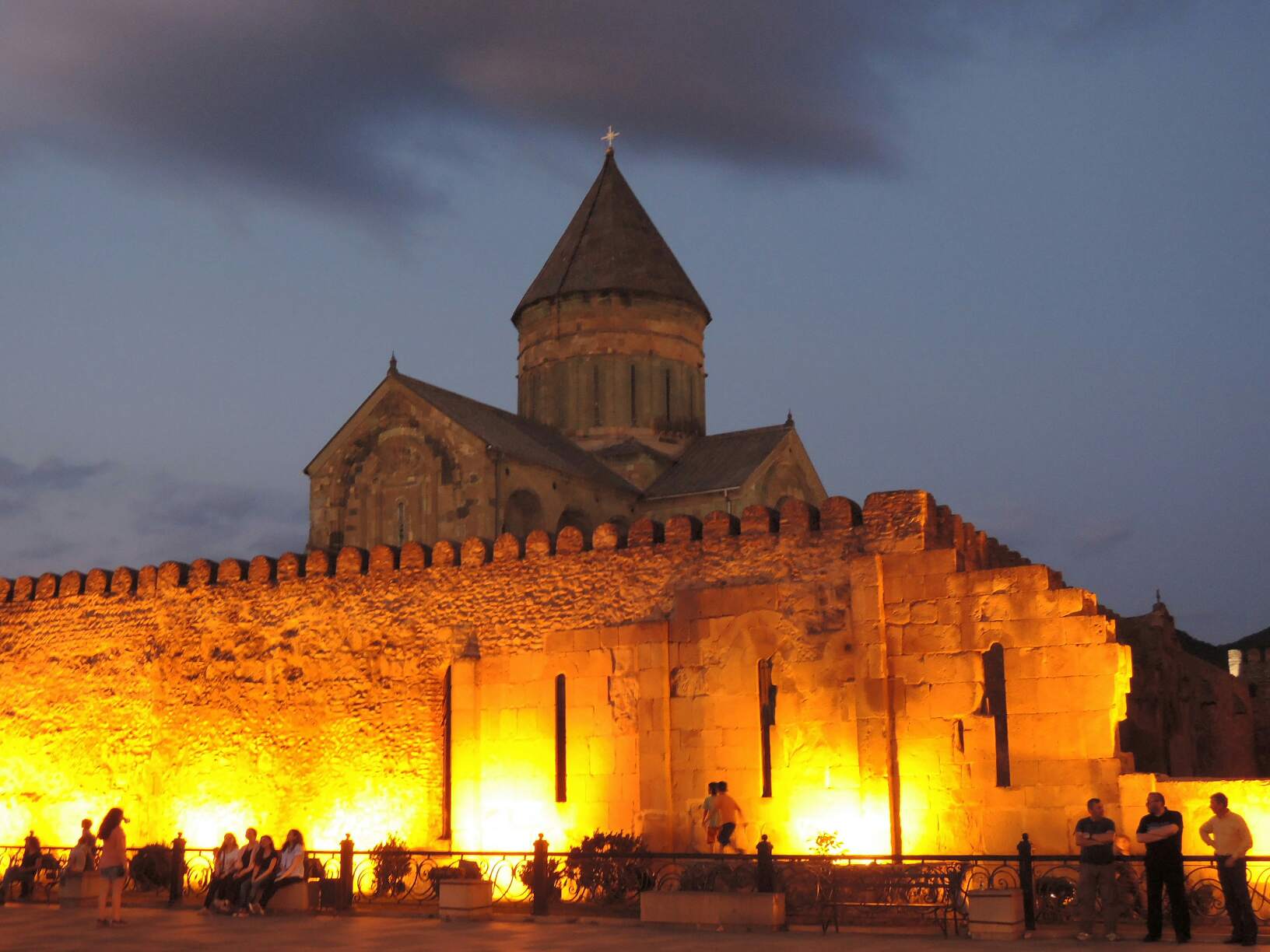