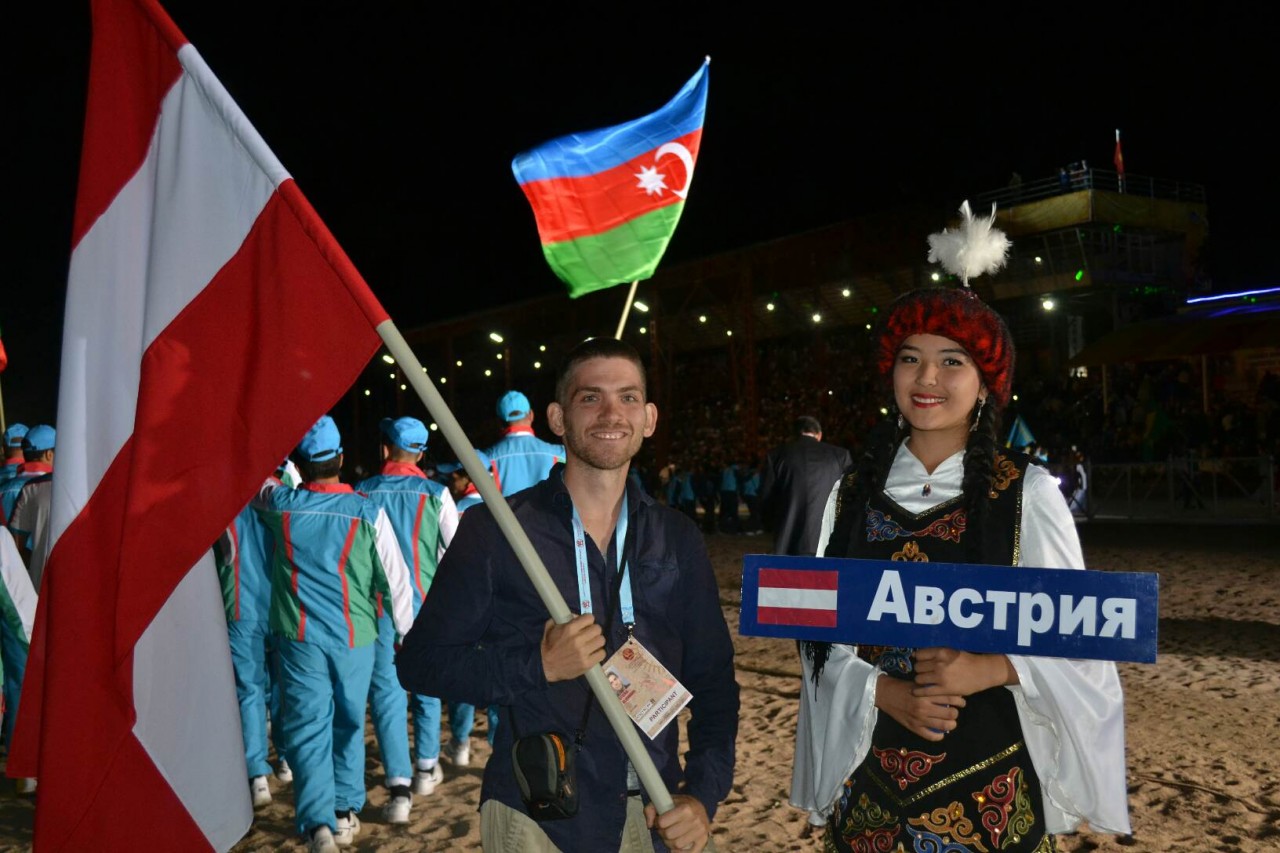 So I was so lucky and got invited to participate in the first World Nomad Games at Lake Issyk Kul in Chalpon Ata. I got paid for the transport and a nice hotel with all meals for the whole week. They said even Boris Jelzin stayed in that hotel once. Too bad he was no vegetarian. Otherwise they might have known what it means to serve vegetarian meals. I got basically the same as the others just without meat. For example when the main dish was Boeuf Stroganoff with rice I got just the rice – oh yes, and I got a few slices of tomato with it.

Anyway the games where amazing! The deal was to play Torguz Korgool at the games and in the free time get the possibility to watch the other games. But basically me and the rest of the westerners got invited so that Kyrgyzstan could show the world how great they are winning against so many countries.

Toguz Korgool is a nomadic board game as strategic as chess. Toguz Korgool translates to nine sheep droppings, but they where so nice and gave us some nuts or beans to play with. So the rules are easy and I learned them fast – just as fast as I learned how easy it is to make mistakes. And then you go “Oh no! What did I do!?” 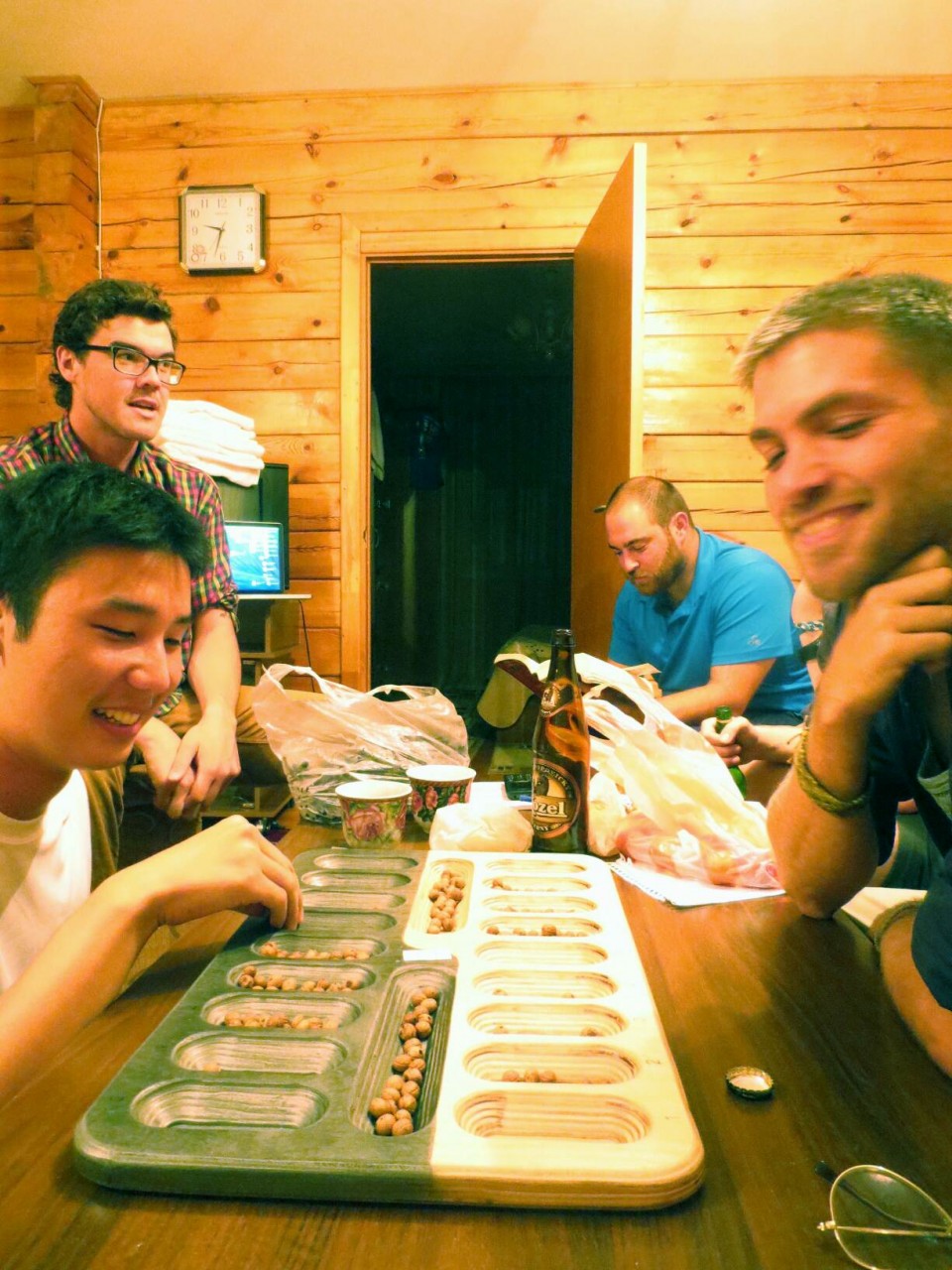 The best part of the event though was the opening ceremony. Since Austria was the country first in the alphabet that took part in the games, I got the honour to open the opening ceremony. They told me to stand here and shortly after they gave me a big Austrian flag and a beautiful Kyrgyz girl to carry into the full hippodrome. I waited a while and then suddenly the speakers heralded the first participating country “AUSTRIA” and me and my escort service walked into the hippodrome. Thousands of people started applauding and cheering when they saw me proudly carrying the Austrian flag.
I got followed by huge teams from Azerbaijan, Afghanistan and many more nomadic countries. And last but not least the president of Kyrgyzstan walked in.
It was a huge show up of all participating countries and at the end everybody came to the stage to shake hands with the president – and me. 🙂 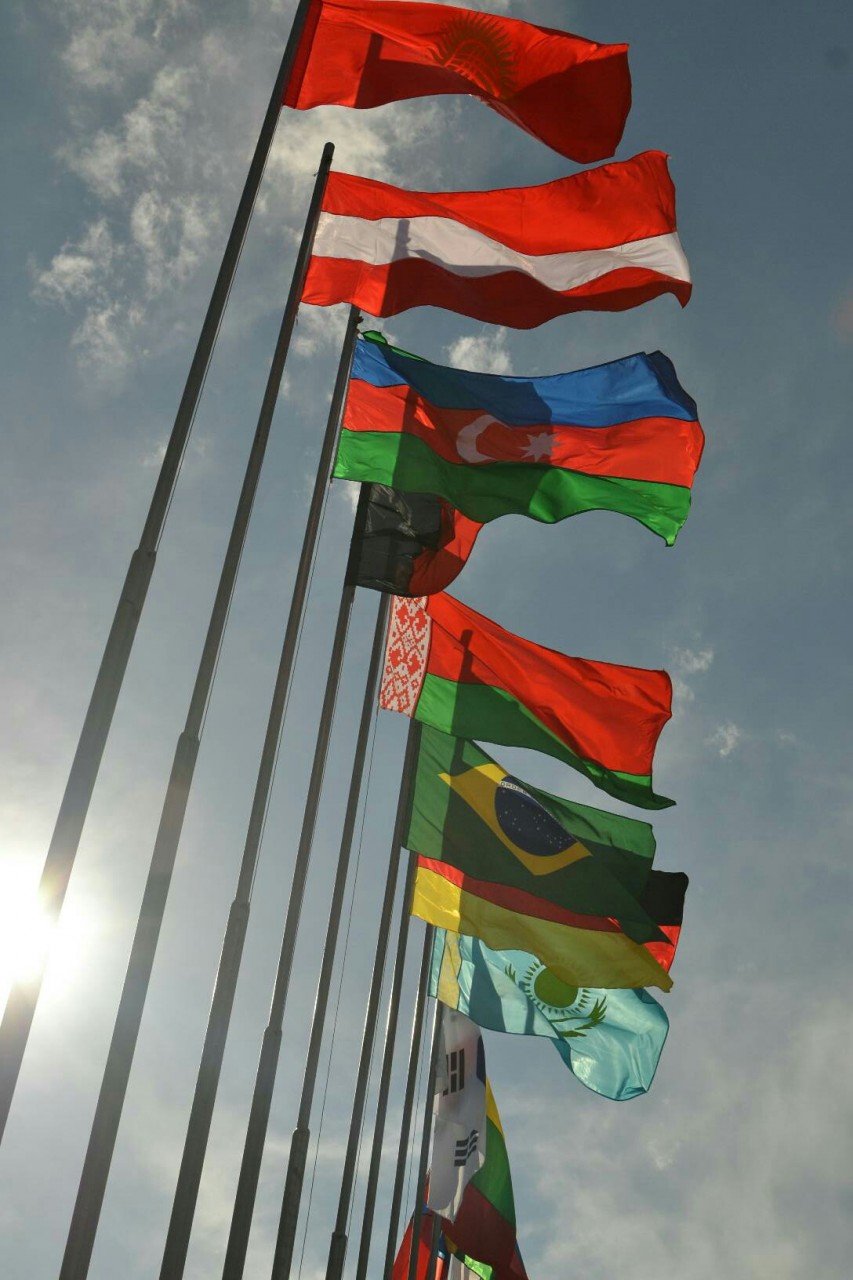 The Austrian flag was there because of me! 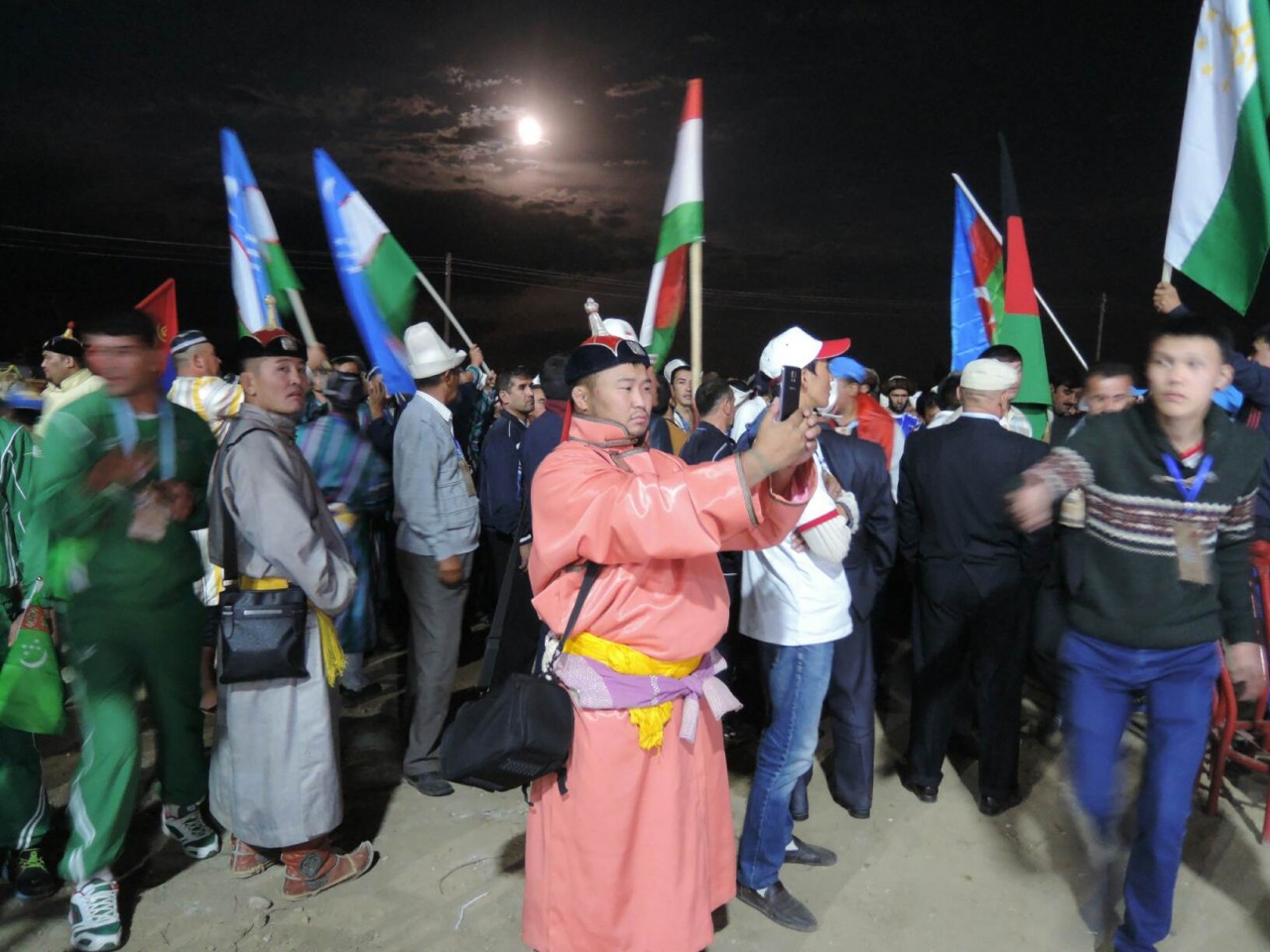 After playing with sheep shit for several days without a break I was happy when they said it’s over for us. I did well for just having learned the game two weeks before. The first game I played even against a friend from France, then I lost two games against professional players from Kyrgyzstan and Kazakhstan and finally I won against Russia and Mongolia. I scored somewhere in the mids from twenty players and went with satisfaction to watch the other nomadic games.
The most interesting to watch was Kok Boru. A rugby like game they play on horses and instead of a ball they just take a dead headless goat. Yes, a dead headless goat!
They need to grab the goat and run with it to one of the two pits – their goal and then throw it in or even jump into it with the goat.
Watching the game feels like you are at a huge post apocalyptic event with lots of crazy freaks fighting each other. 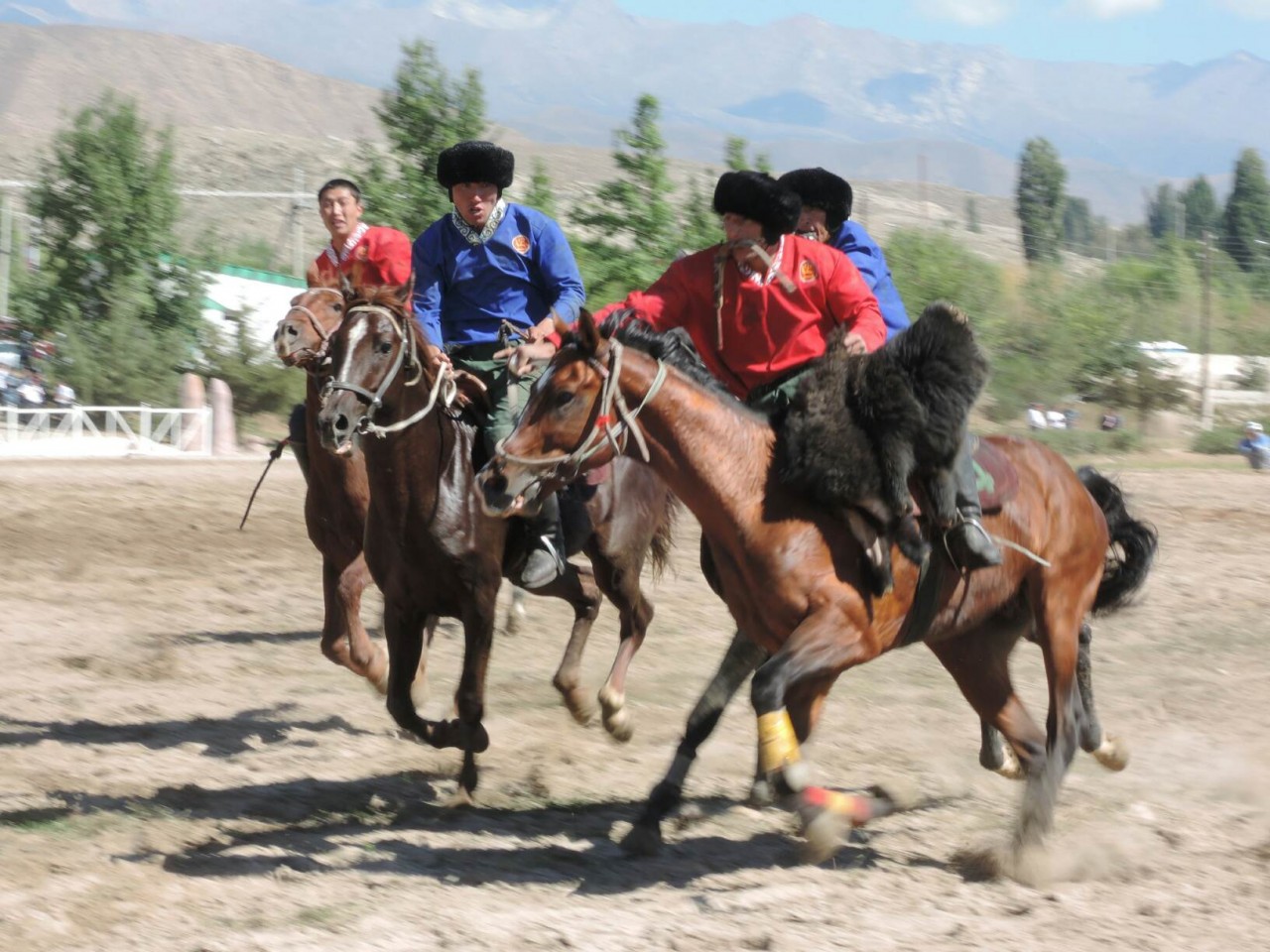 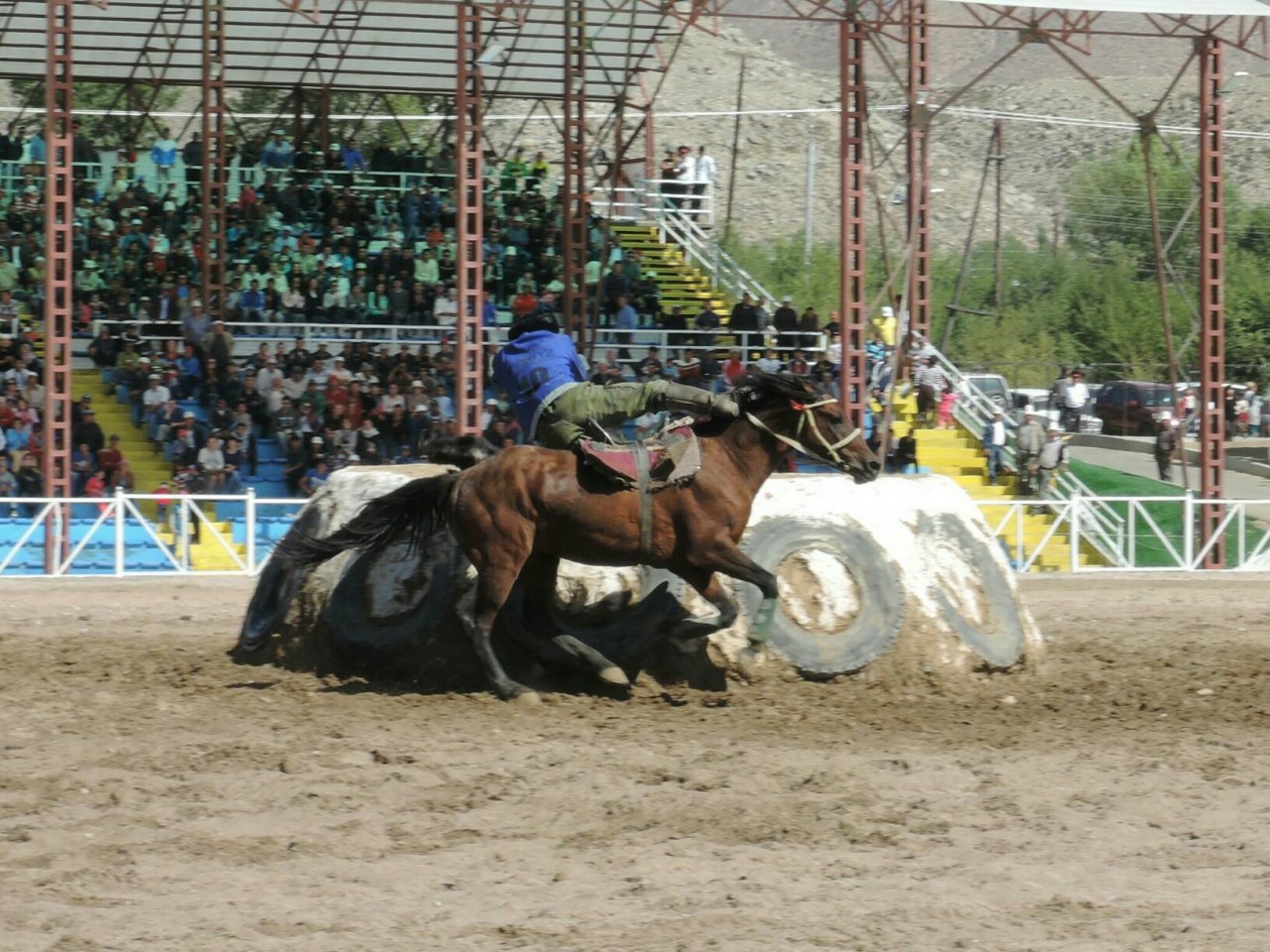 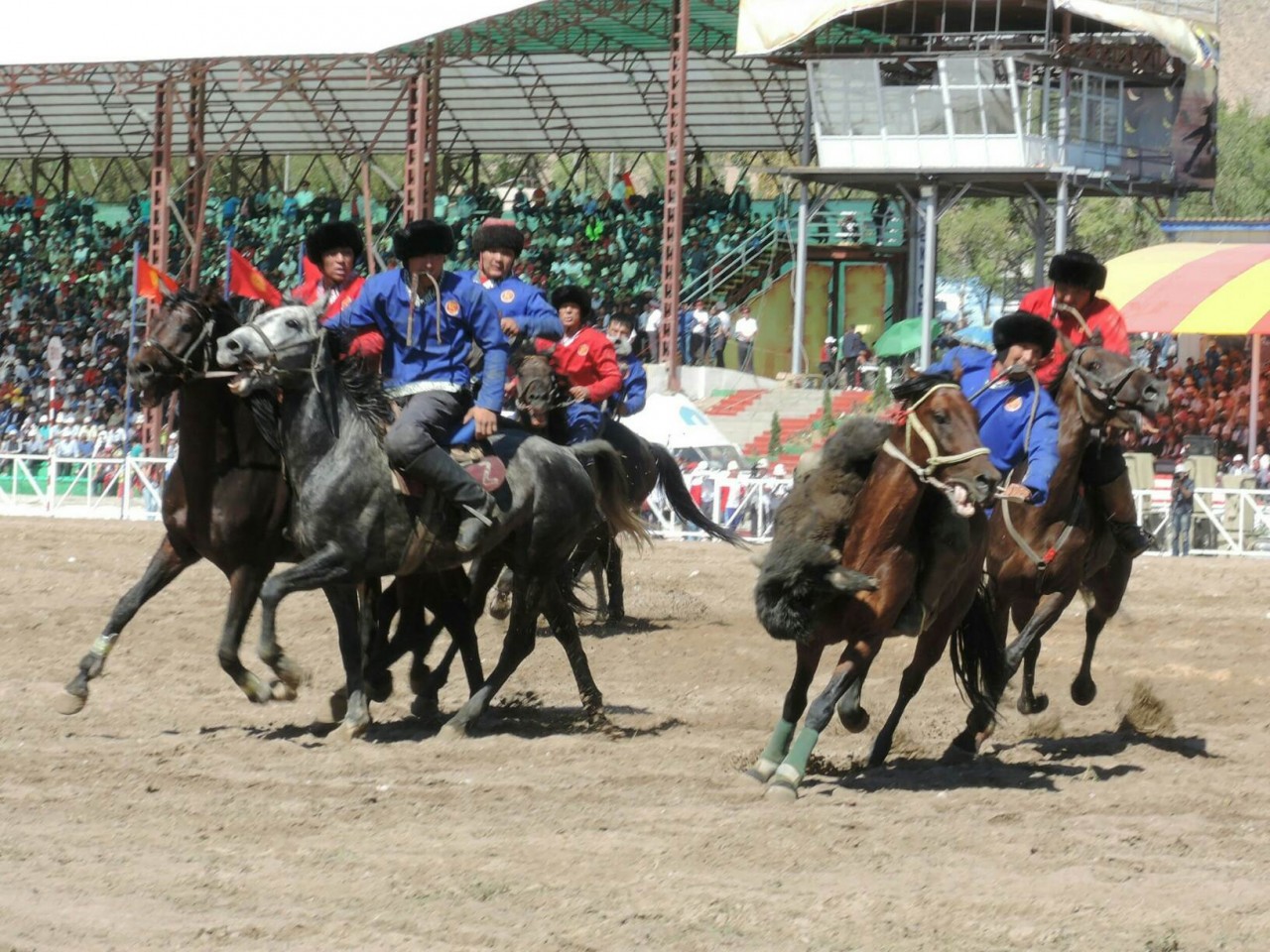 And then they had three different wrestling competitions and a game similar to Boccia. One of the wrestling was basically the same like Judo only with short sleeves. But the techniques were exactly the same. And then they had wrestling with horses. When I heard about that, I wasn’t sure if they wrestle on horses or against horses. It’s the first though. And the Boccia-like game they play with sheep bones. They have on big bone which they use to shoot it at small red coloured bones. The red bones need to be shot out of a big circle. 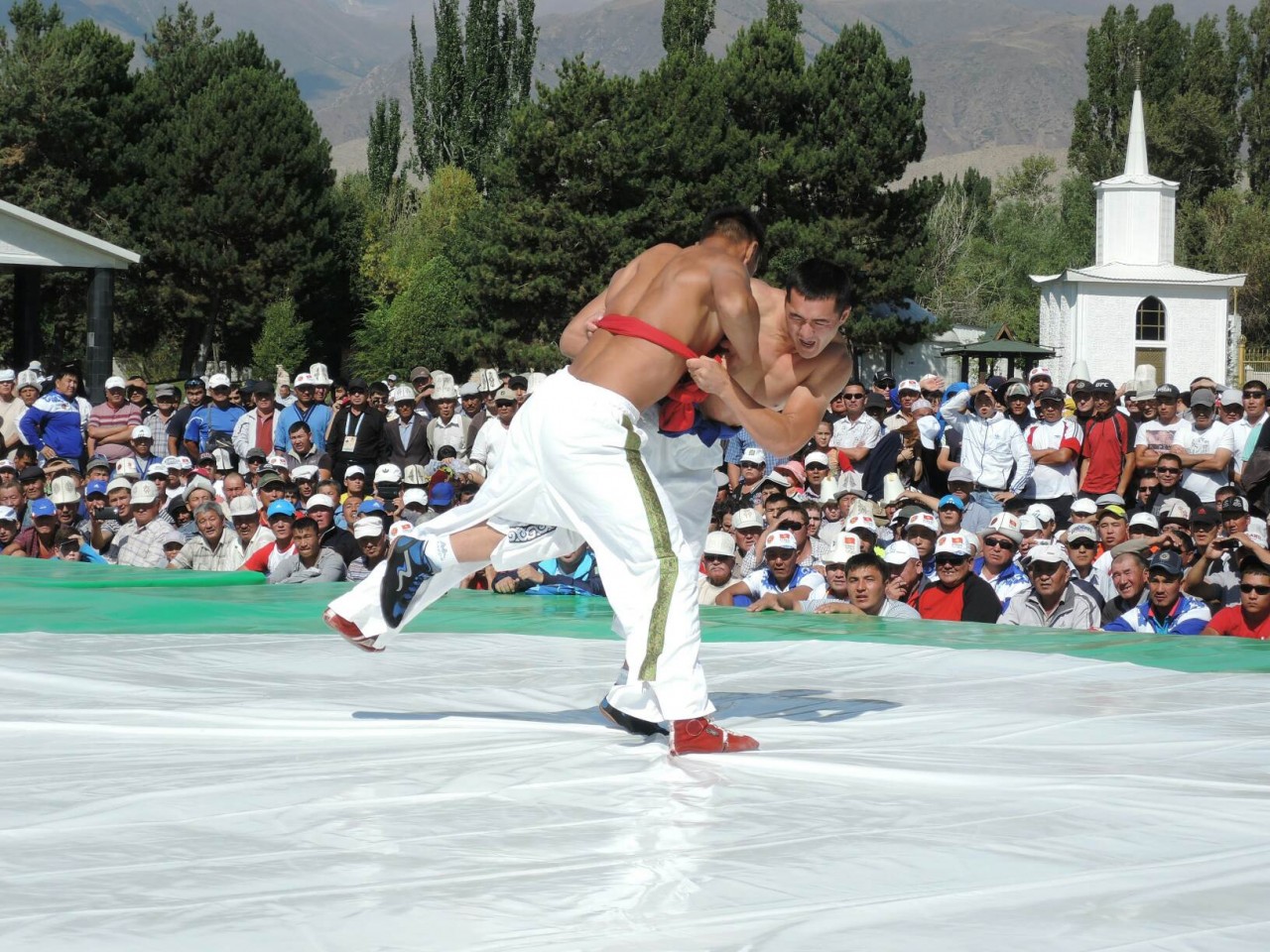 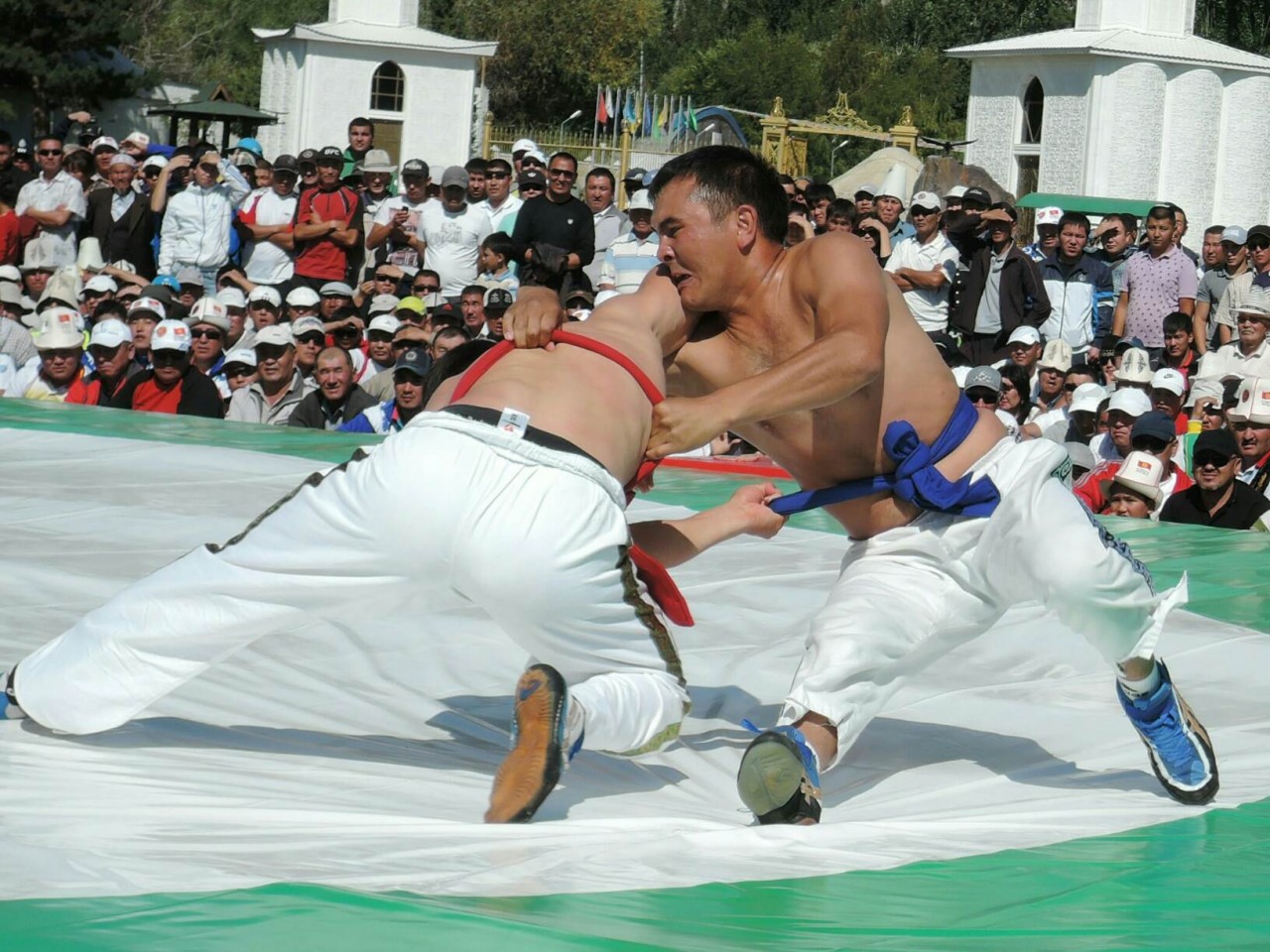 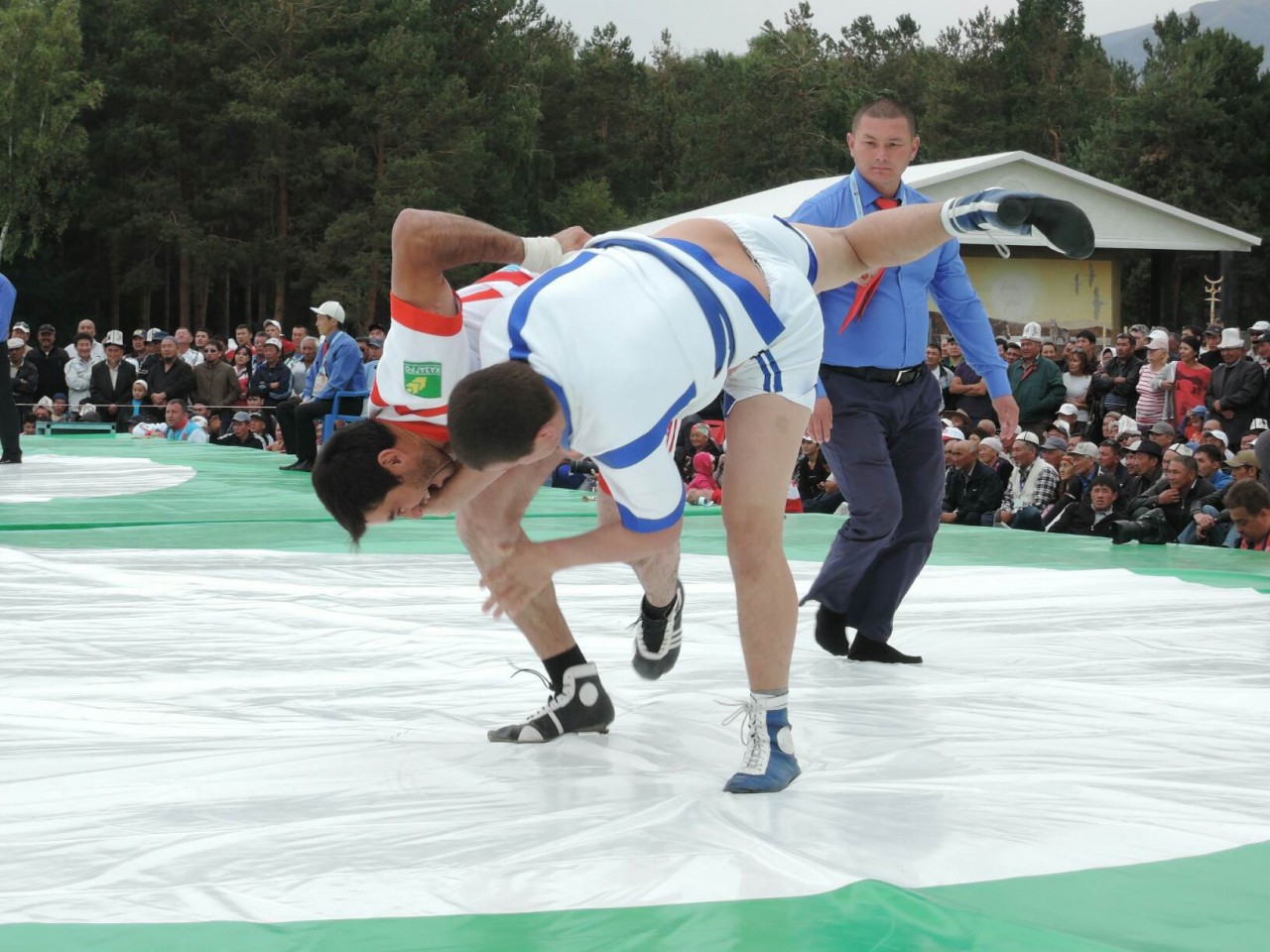 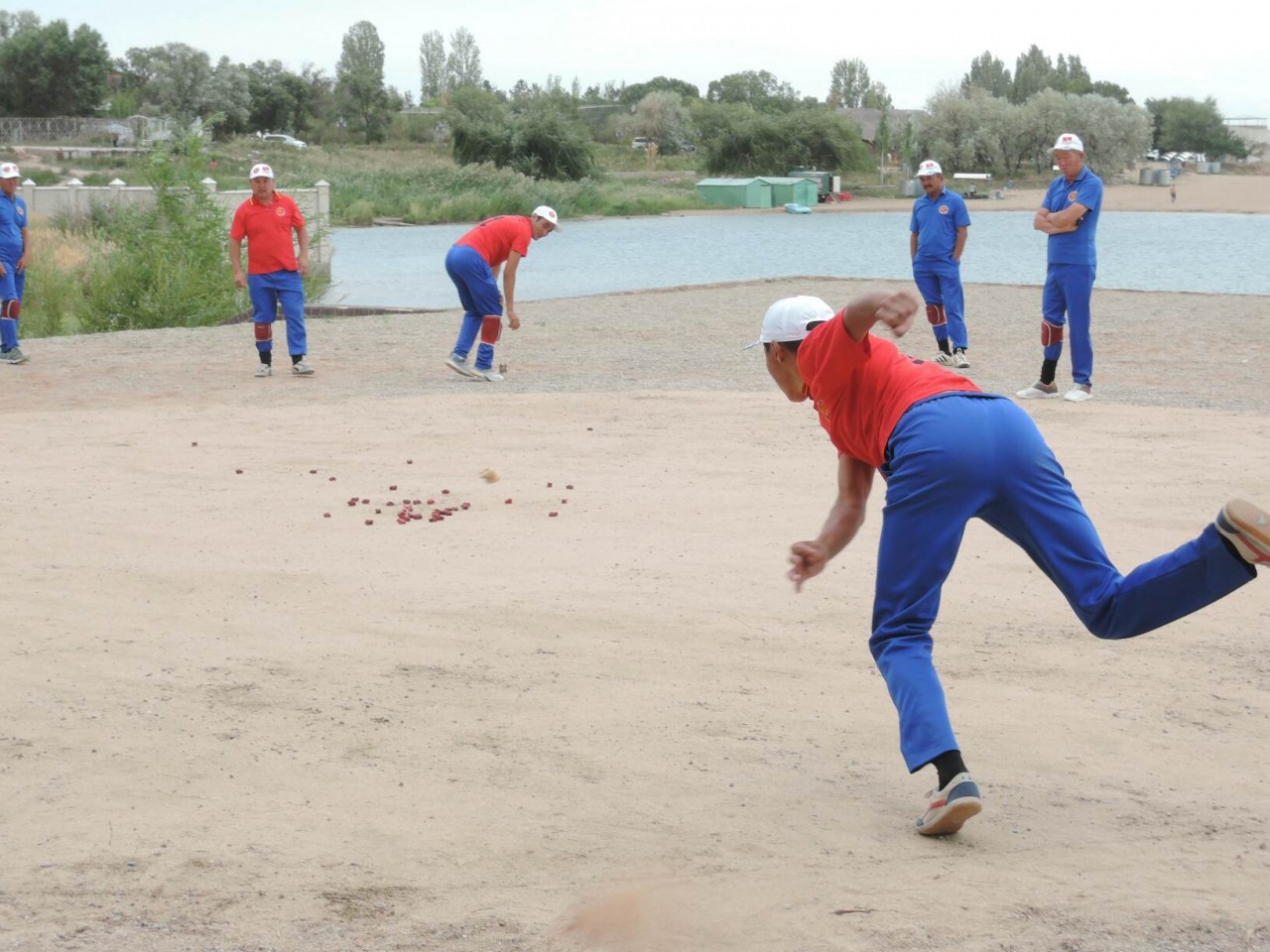 Ordo – A game similar to Boccia

The finals where quite obvious. In most finals it was Kyrgyzstan vs Kyrgyzstan. We decided to cheer for Kyrgyzstan. “KYRGYZSTAN! KYRGYZSTAN!” Anyway, I enjoyed a week full of interesting games with a lot of action and rich in culture. 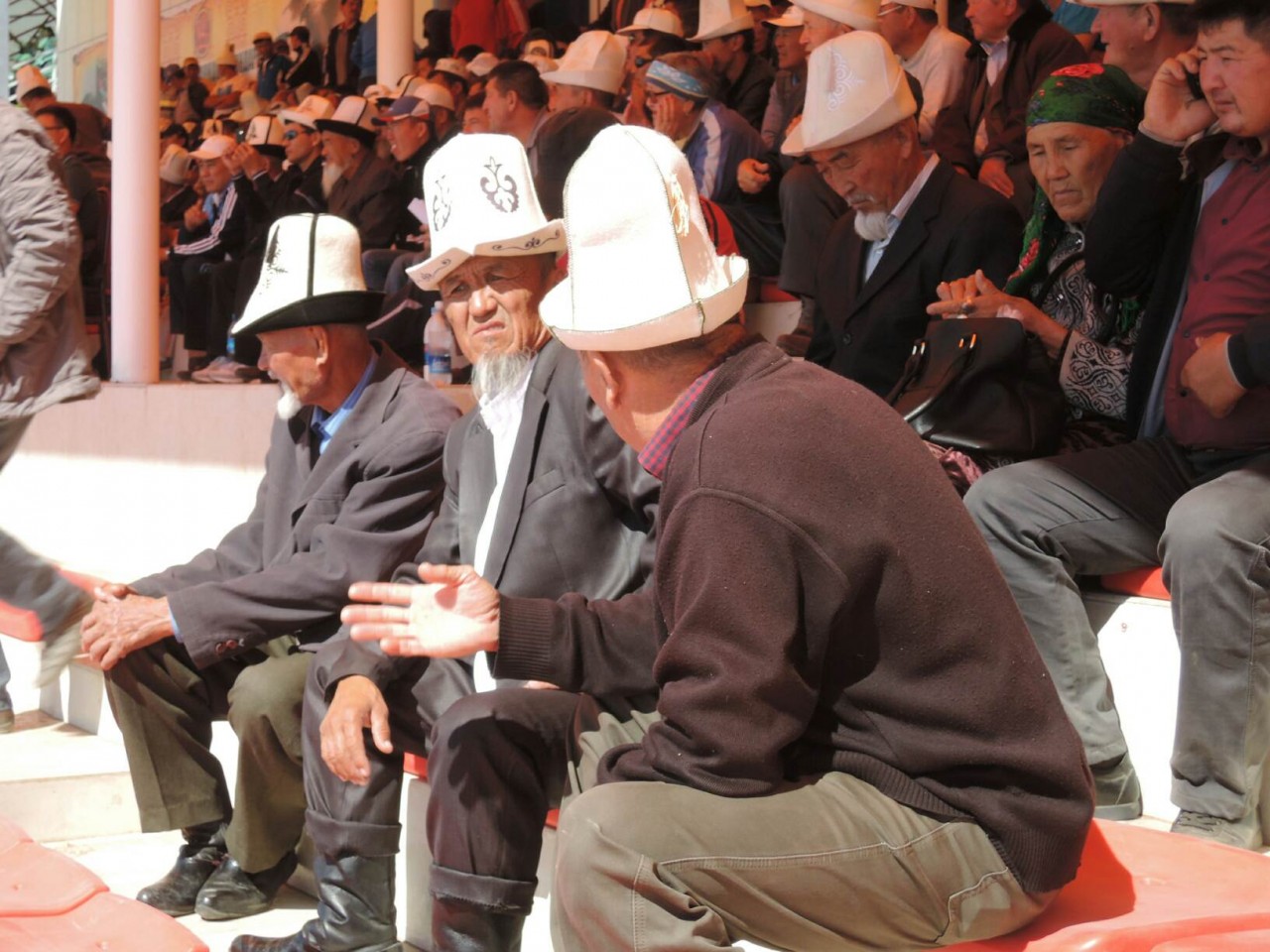 For more information about Kyrgyzstan or Central Asia head over to Caravanistan, a great resource for all necessary information from visas to border-crossings. 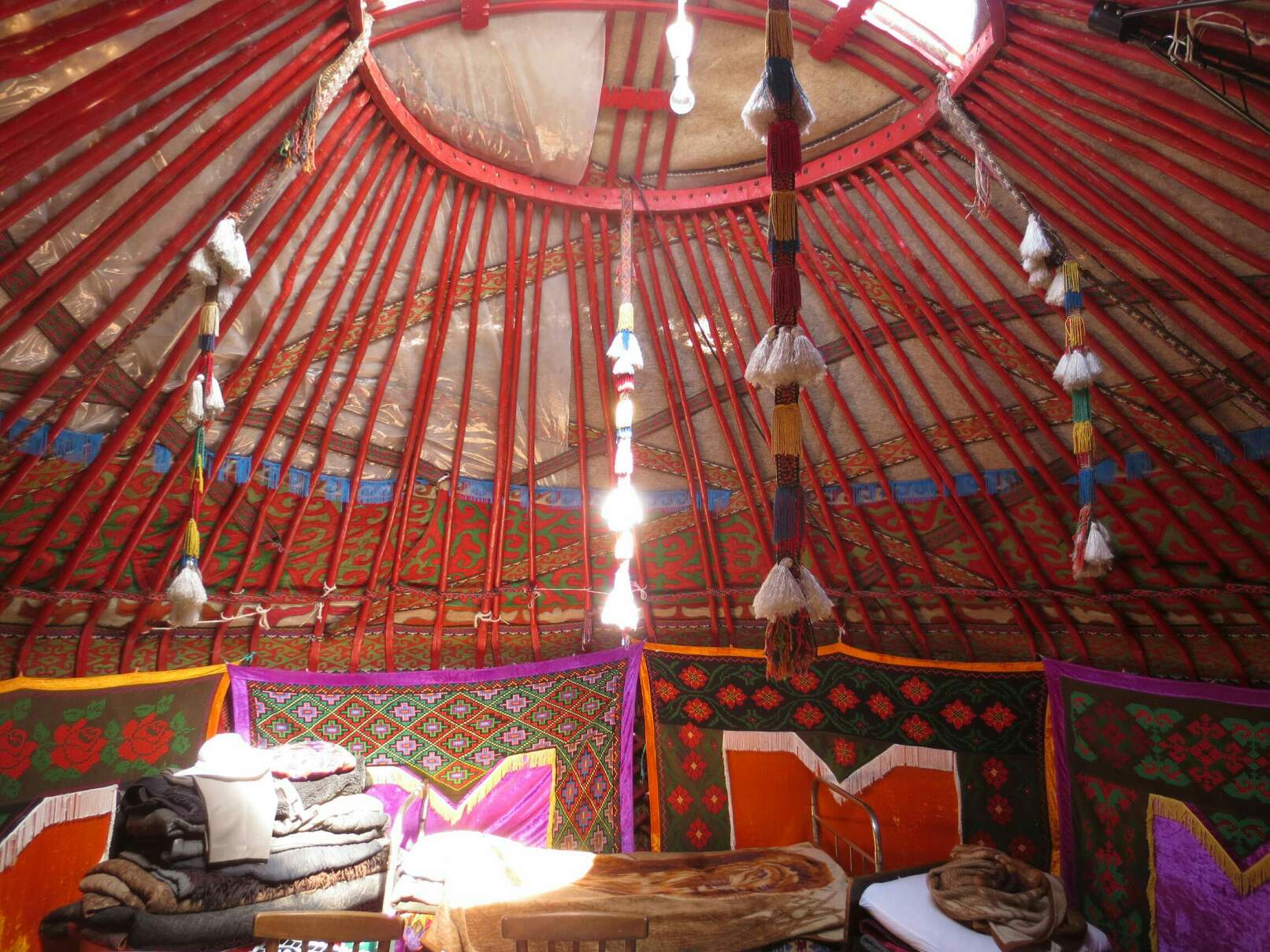 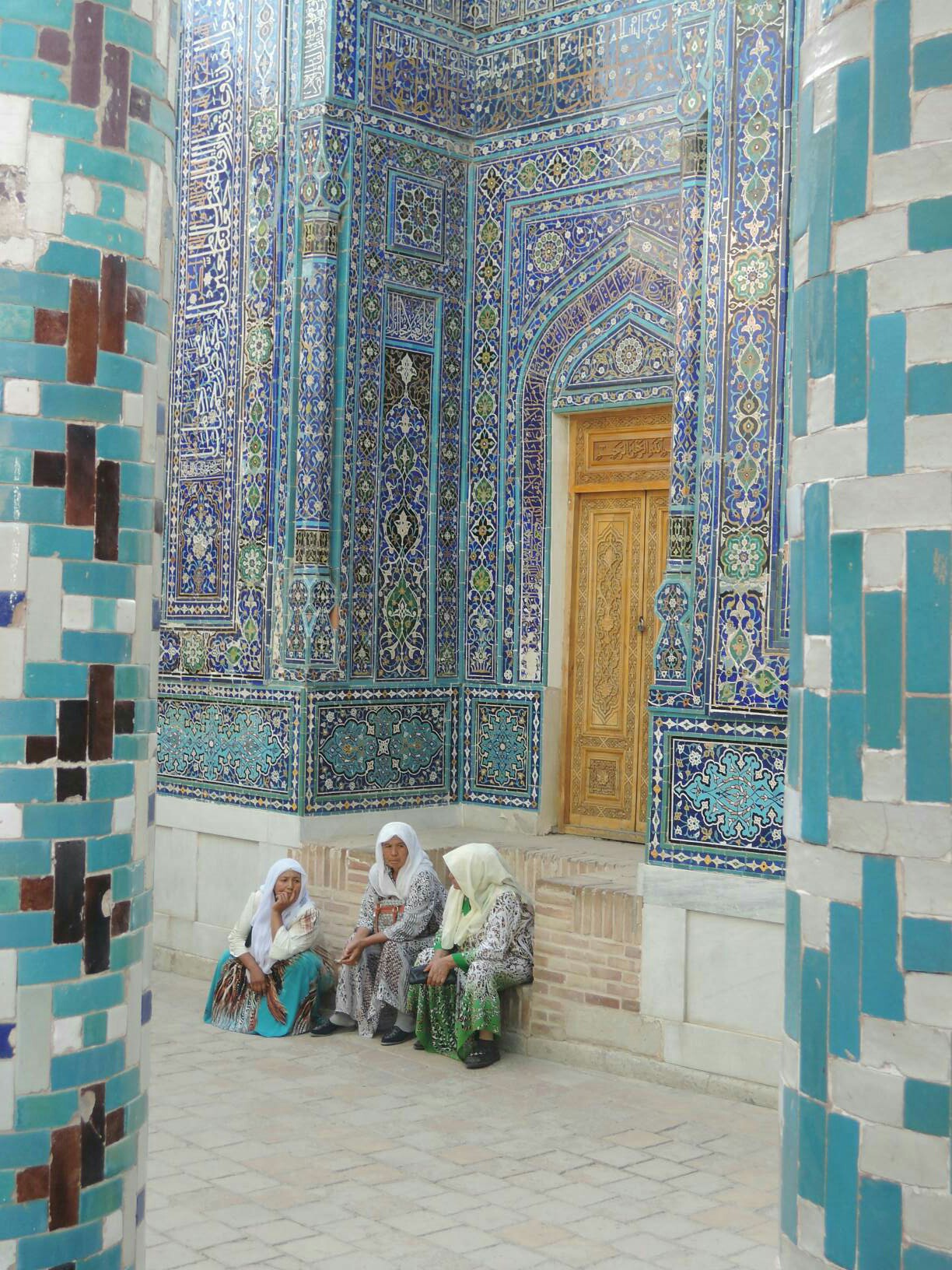